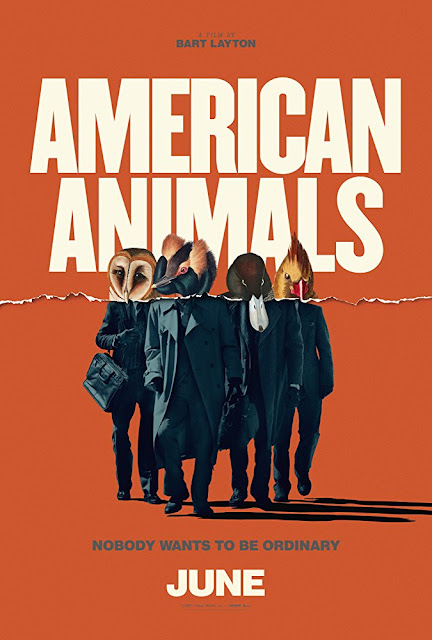 Review American Animals (2018)
What do most of us know about planning a heist that we didn’t glean from the movies? As “American Animals” points out, there’s not a wealth of published how-to manuals on the subject. Yet cinema has shown us enough intricate robberies, both failed and fortune-yielding, to fuel many an idle daydream about how we’d hypothetically do it and make a clean getaway.

Needless to say, the chasm between imagination and reality is an especially gaping one on this front. That disconnect makes the amateur plotting and execution of the 2004 “Transy Book Heist” — which saw four Kentucky university students attempt a multimillion-dollar art theft from their own college library — ideal material for director Bart Layton, whose 2012 hybrid documentary “The Imposter” hinged on the tension between facts and subjective storytelling.

In “American Animals,” Layton brings that same preoccupation to a (mostly) narrative form for the first time, and the results are sensational: a riveting college-boy crime caper that speeds along on pure movie-movie adrenaline, before U-turning into a sobering reflection on young male privilege and entitlement. Performed with piss, vinegar and some poignancy by a fractious quartet of bright young things — with the ever-more-intriguing Barry Keoghan first among equals — Layton’s crowdpleasing Sundance competition entry is tricked out to the max with lithe structural fillips, flashes of cinematic quotation and formal sleight of hand that gradually reveals a pointed thematic purpose.

“This is not based on a true story,” reads a title card at the outset of “American Animals,” before the words “not based on” are casually wiped off the screen. It’s a trick that immediately puts viewers on the alert for some tongue-in-cheek narrative gymnastics, and Layton’s screenplay delivers thick and fast on that score, adopting a faux-documentary format built on conflicting perspectives — a device not unlike the one recently and contentiously used in “I, Tonya.” The key twist here, however, is that the framing narration is provided by the story’s real-life subjects.

Now older and at least a little wiser — not hard in light of the shenanigans they relate — Spencer Reinhard, Warren Lipka, Eric Borsuk and Chas Allen appear on screen to prod and tweak the film’s dramatization of their 14-year-old story into shape, looking ruefully on as it’s enacted by, respectively, Keoghan, Evan Peters, Jared Abrahamson and Blake Jenner. While many films would use the men’s involvement as a stamp of authenticity on its version of events, “American Animals” instead calls on the real-life criminals to cast small seeds of doubt in the proceedings, as they variously question what they knew then and what they know now. That the originals and their boyish thespian counterparts don’t always line up physically or behaviorally makes sense in this context: After all, who doesn’t morph into a somewhat different person between their late teens and mid-thirties?

For Reinhard, played by Keoghan with a mournful air of wary curiosity throughout, the unlikely path to corruption begins with the age-old artist’s yearning for a more storied life to draw, and draw upon: A gifted fine-art student from a polite suburban background, he enters Kentucky’s Transylvania University hoping to “understand something more about life that I wasn’t getting to experience.” He gets more of that than he bargains for from Lipka, a livewire misfit on an ill-maintained athletics scholarship, who hits coolly on the idea of relieving the university library of some of its rarest, most valuable, and securely stored volumes, John James Audebon’s celebrated “Birds of America” — the famously rich illustrations from which lend the film both its title and some of its ripest imagery — among them.