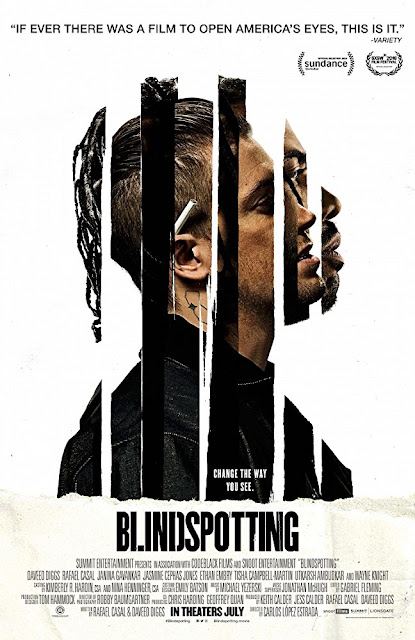 Review Blindspotting (2018)
Both arresting and frustratingly flawed, Blindspotting represents an ambitious attempt to forge hip-hop into something of a cinematic storytelling style and not just a musical genre and attitude. A boisterously intense look at class and crime in an Oakland pointedly shown to be at the tipping point into gentrification, Carlos Lopez Estrada’s debut feature brandishes brash exuberance and stilted storytelling tropes in roughly equal measure, yielding a result that stimulates just as it cheapens itself dramatically. Commercially, its main hope is to be embraced by young fans of the musical style, but a breakout seems unlikely.


Trailer Blindspotting (2018)
The script was written by Rafael Casal and Daveed Diggs, the latter best known for essaying both Jefferson and the Marquis de Lafayette in Hamilton on Broadway. The young men they play, while both creatures of the streets (as well as fellow moving-van drivers by day), are quite different in temperament. Casal’s Miles is white, wild and impulsively reckless, while Diggs’ Collin is black, cautious and paranoid, with good reason; he’s three days away from the lifting of his probation, but if he commits even the slightest infraction before then, it’s back to the joint for who knows how long.

Given Miles’ impulsive irresponsibility, the smartest thing Collin could do would be to stay away from Miles until he’s in the clear. But no, they hit the streets at night, and it doesn’t take long for Miles to produce not one, not two, but six guns to play with one evening. For a startling capper to the night, Collin witnesses a cop pursue and shoot a young black man who’s trying to flee down the street, a violent act far beyond the call and pale. Will the rogue cop somehow track down Collin to eliminate the one witness to his own overreaction and blatant crime?

The young men’s day job provides a useful look at the changes transforming a long-impoverished and dangerous city into the latest adjunct to the Bay Area tech boom. Its manifestations send Miles into a violent rage at one point and the issue is not discussed in a pro-and-con manner. Rather, the economic and social changes are responded to strictly in emotional terms, first and foremost by the volcanically emotive Miles, a character so brainlessly compulsive and violent that he becomes pretty hard to take after a while.

By contrast, Collin uses life’s challenges to try to mature and improve himself, which proves difficult when he surprisingly once again encounters the murderous cop. But it does send him into paroxysms of hip-hop-styled ejaculations of fear, rage and paranoia that come off as both novel and awkward.

And so it is for the entire film, which betrays instincts both realistic and fantastical, insightful and banal. The women in the men’s orbit unfortunately remain mostly on the sidelines. The rap is compulsive, while technically, the film is rough and ready.