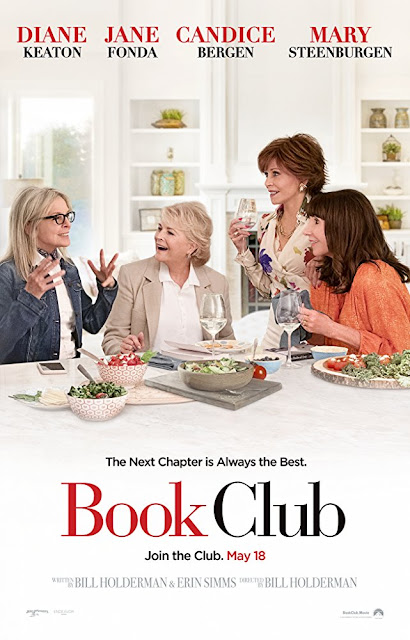 Review Book Club (2018)
Aside from its being a shameless plug for the “50 Shades” books, there’s nary a surprise in store with “Book Club,” the kind of comfort-food movie that’s been pre-masticated by committee to the consistency of pudding (with even less flavor). Diane Keaton, Jane Fonda, Candice Bergen, and Mary Steenburgen are the clan of readers whose latest selection stirs dormant libidos, albeit so vaguely that viewers needn’t fear that any actual sex surfaces in this prudishly snickering sex comedy.

MORE REVIEWS
Concert Review: U2 Light Up the Forum on Experience + Innocence Tour
Once the quartet dives into E.L. James’ steamy prose, however, everyone’s erotic pot gets stirred. Diane finds herself wooed by a dashing pilot (Andy Garcia), even as her overprotective daughters (Alicia Silverstone, Katie Aselton) demand she move from Southern California to be near them in Arizona. On a dare, Sharon braves the world of online dating, meeting prospects played by Richard Dreyfuss and Wallace Shawn. Vivian, who’s spurned romance for no-strings hookups her whole life, finds herself rattled by the resurfacing of Don Johnson as an erstwhile suitor. On the other hand, trying to teach an old horse new tricks creates discord for Carol and Bruce, as he’s a staid, reliable soul who resents being pushed out of his comfort zone.

More attention seems to have been paid to the luxe settings and clothes on display here than to the script by director Bill Holderman and co-writer Erin Simms. It’s a maiden voyage in those roles for both of them, a producer and actor respectively who’ve each worked on several prior projects for Fonda’s recurrent costar Robert Redford. But on the page and in on-screen execution, “Book Club” is so generic it might have been assembled by grizzled sitcom veterans. Every formulaic nail is firmly hammered into place, leaving the cast’s rich resources entirely untapped — the women can only dither and mug, while the men stand on the sides exuding quiet masculine patience.

Occasionally a reassuring homily is dropped into the flat dialogue, should you fear even mentioning “50 Shades” (which it does a lot) might render this pastel-hued spa weekend of a movie morally suspect. Yet even while stammering out and tittering over truncated excerpts, the characters (and their film) barely seem to notice that those books are about kinky sex. “Sex” all by itself seems enough to fry their circuits, just as a concept.

The only penetration actually going on here is mercantile: “Book Club” too often feels like a catalog of potential vacation, home decor, and wardrobe purchases for well-to-do AARP members — or a brochure for a high-end retirement community. That the female leads (ranging indistinguishably from age 65 to 80) all look fabulous is of course an integral part of that sales pitch.

Viewed on its own terms as a glossy, inoffensive consumer commodity, “Book Club” works as intended (at the advance screening attended, guests exited duly remarking, “That was cute!”). Still, one can be forgiven for wishing these actresses had been given something to do that wasn’t so tame and pettable. Abetted by the expected assortment of bland and/or nostalgic pre-existing tracks, any randomly selected moment of Peter Nashel’s score might just as easily accompany a YouTube compilation of adorable kittens, puppies, or toddlers.