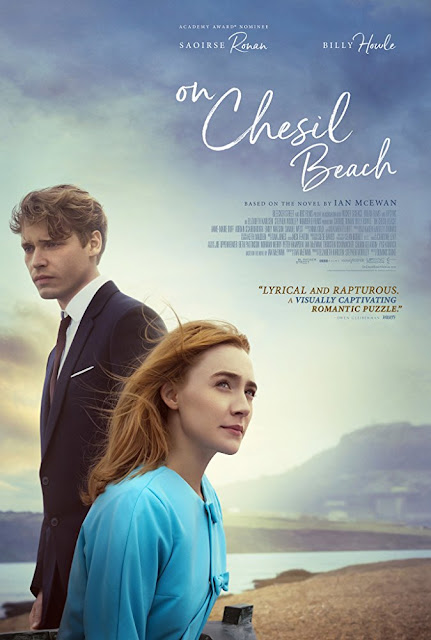 Review On Chesil Beach (2017)
The overwhelming English sadness of Ian McEwan’s novella On Chesil Beach has been transferred to the movie screen, adapted by the author and directed with scrupulous sensitivity and care by Dominic Cooke, known for his stage work and making his feature film debut here. It is a tender and valuable film, well acted, with a shrewd eye for how naive you can be in your early 20s, how impatient, how pompous, how tragicomically un-self-aware.

I have to confess to feeling that this film – like other adaptations of McEwan, and also Julian Barnes – is constrained by flashbacks and by a certain literary good taste and hardback cultural prestige. It doesn’t quite explode into uninhibited life, even when the anger overflows at the end, although this is partly the effect of its setting and era: the cloud-cover of Britain in the duffel-coated early 1960s.

It is the story of Florence and Edward, young university graduates getting married in 1962. She is a talented and ambitious classical musician from a well-to-do family and he is a clever young man from humbler origins. Both have first-class degrees and, in consequence, no small opinion of themselves. They go as virgins to the marriage bed in a way that was quite normal then and all but unimaginable now. The setting is a horribly conventional seaside hotel on Chesil Beach in Dorset, whose wild and windblown expanse is in grim contrast to their own corseted timidity and ignorance. Its loneliness is, however, appropriate enough, and Cooke and cinematographer Sean Bobbitt contrive a moment in which they look marooned on that beach, as if washed up from some disaster.

Emotional waste … Billy Howle and Saoirse Ronan in On Chesil Beach.
The wedding night is a painful, intimately humiliating fiasco with devastating consequences. The novel has a famous coup, in which McEwan telescopes the rest of Edward’s life into just a few pages – a brisk parade of inconsequence that allows you to understand how important that single evening had been. The movie replicates this nicely, but with a notably more emollient resolution.

Billy Howle plays Edward, a role not so very different from his part as young Tony in the recent film version of Barnes’s The Sense of an Ending: smart, hardworking with a bit of a temper. After a couple of beers to celebrate his exam results, he feels the need to confide his success to someone, anyone, and stumbles into a CND meeting in Oxford. There he falls head over heels for Florence: a quietly beautiful young violinist played by Saoirse Ronan with a well fabricated English accent of the time; she gets its sharp, quick chirrup right.

Both have family difficulties. Florence’s mother Violet – an amusing cameo for Emily Watson – is an arrogant Oxford don who thinks nothing of telephone conversations with Iris Murdoch. Her father Geoffrey is a wealthy engineer (rather looked down on by her mother) played by Samuel West, with a tendency to male rage unsettlingly like Edward’s. Edward’s own dad Lionel is a gentle soul, nicely played by Adrian Scarborough; but his mother Marjorie, played with courage and attack by Anne-Marie Duff, is a talented artist whose eccentricities have escalated into mental disturbance due to a horrendous accident: being hit by an opening train door on a railway station platform.

That moment is the most shocking in the film: the violence, and then the lifetime of care needed to contain and control its consequences, are well suggested; the movie soberly keeps Marjorie away from any suggestion of black comedy.

But all this is revealed, like everything else, in a flashback from the central scene: the newlyweds’ bedroom, where Edward and Florence endure their excruciating ordeal. It is opened out almost as a stage play might be. Each and every flashback, whether happy or sad, reveals the same poignant thing: they were a thousand times more relaxed in the past than now, at this longed-for moment of supposed abandon. But the flashbacks, though fraught with meaning, have the effect of impeding momentum and taking some emotional weight away from what’s happening in the present tense on Chesil Beach. There’s even a flashback-within-a-flashback. Florence remembers submissively acting as a page-turner for a famous pianist at London’s Wigmore Hall, and at that moment remembering helping her grumpy dad as a teenager on his yacht.

What On Chesil Beach gets right is the sheer silly, tragic pointlessness of the virgin-wedding-night business and how disturbing sex was for a generation whose hypocritical elders had withheld information about it – a bizarrely sacrificial ceremony which probably had its last gasp with our own Lady Diana Spencer. And of course it is made even worse by hints that a new era of freedom is arriving but still not quite here, like the Beatles’ first LP in Larkin’s poem. A world of wrongness and frustration. The movie is a muted elegy to emotional waste.