Actress Katherine Kingsley brings Dusty Springfield to a stop in Jonathan Harvey’s boisterous bio-musical, then slows to a slur. 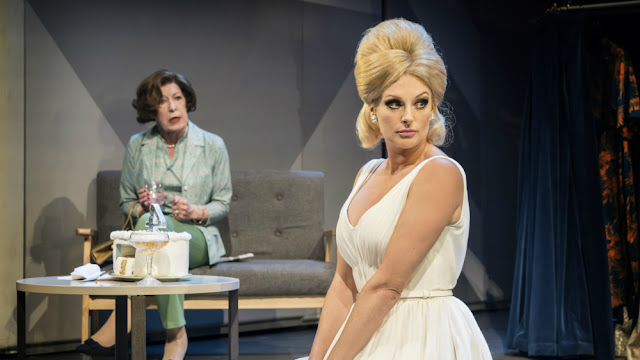 Ashes to ashes, Dusty to Dusty. Almost 20 years after her death, the loss of Dusty Springfield still stings on these shores. Sniffles ring out at the end of Jonathan Harvey’s jukebox musical “Dusty,” as footage of the iconic songstress’s funeral spills across the stage. So when actress Katherine Kingsley reappears for a final encore, the spit of Springfield in her prime, it feels like a reincarnation of sorts. Beneath that familiar blonde beehive, Kingsley stands still, smiles the slightest of smiles and unleashes that familiar earthy, authoritative voice, soaring off into “You Don’t Have To Say You Love Me.”

Hers is a complex performance in a script bent on slightness. Like the Kinks musical “Sunny Afternoon,” Dusty weaves a great artist’s body of work into the threads of an all-too-human life. Harvey might fold in sweet lifelong friendships and broken relationships to tug on the heartstrings, but his script does more than rattle through a rollercoaster career as it’s derailed by uppers, downers and corkscrews. “Dusty” draws a portrait of the artist, almost a cultural critique, to asks what made Dusty Dusty — and what dragged her down.

Throughout, Springfield seems like a woman in disguise, hiding from herself and from the world. Donning a new wig for every scene, blinking big lashes beneath blue-dusted lids, Kingsley shows us an act: a pop star who constructed her public persona; not Mary O’Brien, daughter of Irish immigrants, but Dusty Springfield, superstar-in-waiting. “I’m 90 per smoke and mirrors, darling,” she purrs in that modulated husk of a voice. “And illusion.”

If Springfield was a singular talent, “Dusty” shows why. In a world ruled by groups, with The Beatles on song, she stepped up to the mic as a female solo artist, dropping her brother to her stern mother’s dismay (Roberta Taylor, gin in hand), and bringing the sound of black, American soul to Britain’s peppy pop scene.

Solo in life too, perhaps: Dusty tells one suitor, “I’m not the marrying kind,” before obliterating her relationship with her lover Lois Wilson (Joanna Frances). Even Springfield’s chirpier numbers — “Wishing and Hoping” or “Middle of Nowhere” — throb with desolation and loneliness. Her voice pulls them down from giddiness to the gut; a low hum of hurt, soulful and deep. This is the woman who stood against apartheid, deported from South Africa for playing to a mixed crowd; who struck out on her own to make it in America, convinced she was built for bigger things; who kept her sexuality a secret behind firmly closed doors.

Together, Harvey’s script and Kingsley’s captivating performance drill into her artistry. Against the fizz of Tim Jackson’s high-octane choreography, Kingsley’s Springfield stands still, cutting poses with the utmost of presence and poise. She sings in much the same way, slowing her band right down on “Son of a Preacher Man” so her voice could sustain the song all alone. Her precision speaks volumes; cozying up to the mic momentarily, then clinging to an extended note. She’ll record in the restroom if it means the right sound, and Kingsley’s voice passes muster — which is to say, it astounds. Springfield’s a Rolls Royce voice, but it only worked when well-oiled.
Springfield’s supreme talent came with perfectionism, insecurity and stage fright. Kingsley tightens her grip on the bottle as she loses her grip on life and, even better, as drink and drugs grind her down, her Dusty slows her way into a slur. In L.A., blitzed and blurry, she seems to unspool like an old tape cassette.

If it tends towards armchair psychology, “Dusty” still makes a persuasive case about a rounded character. Springfield and her songs perhaps deserve something classier than a gag-heavy script that nudges director Maria Friedman’s skittish production into naffness, but equally, with her wry humor and unassuming nature, Springfield would have approved of its crowd-pleasing charm. Rufus Hound, as her old school manager Vic Billings, brings a bit of music-hall camp, while Esther Coles and Ella Kenion, as Dusty’s closest pals, show what it means to stay close at hand. Even so, this is Kingsley’s show — and Dusty’s.

PRODUCTION: An Eleanor Lloyd Productions production of a musical in two acts by Jonathan Harvey.