It’s “House of Cards” as a toga party. 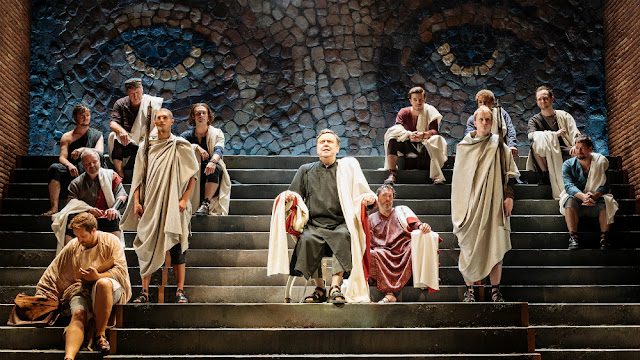 “Imperium” builds Rome in a day. Robert Harris’ trilogy of novels charts the city’s slide from a great civilization to a grim imperial power, as democracy buckles and dictatorship digs in. Onstage, in “Wolf Hall” adaptor Mike Poulton’s adaptation for the Royal Shakespeare Company, now newly arrived in London’s West End, it plays like a grand history cycle: the errors of one era give rise to those of the next. It might be set in antiquity, but contemporary resonance is close at hand.

Ostensibly a biography of Marcus Tulius Cicero — lawyer, orator and senator — as told by his slave-cum-secretary Tiro (Joseph Kloska), “Imperium” is most illuminating on the machinations of political power. While Richard McCabe’s calculating, quick-witted Cicero charms his way to a unanimous electoral victory as Rome’s new consul, a crowd of his rivals are on political maneuvers.

Poulton uses the language of the present to survey the past, so that to watch them jostling for position is to understand the various paths to power. For Joe Dixon’s gladiatorial Catiline, stirring a popular revolt on Rome’s self-serving senate, political weight comes via the masses, whereas Peter De Jersey’s Julius Caesar, a charismatic outsider with a taste for cavorting, puts his cards in with the super-rich. David Nicolle’s Crassus, draped in fine silks, is content to sit back and pull his puppet’s strings. Cicero’s approach is to go through the courts, closing loopholes and tightening laws to cement his vision of a modern republican state.

Throughout, Poulton shows how precarious the business of politics can be, given someone is always after your spot. It’s all checks and balances: checking your back, keeping your balance, and McCabe’s Cicero masters the game with a spring in his step, as if hopping across hot coals for sport. In Harris’ Rome, careers fall via coups and corruption, but lives are cut short by lone-wolf assassins. If they don’t get you, your crimes in office do, and Cicero’s self-certainty and self-interest ultimately catch up with him. In forgetting his old allies, by accident or design, he creates his own enemies, and De Jersey’s Caesar, having survived a near-miss, picks his moment to perfection. “Time for change” gives way to an ominous new mantra in Rome: “Times have changed.”

The second part, weaker since history goes wandering, examines the vacuum after Caesar’s demise. With Mark Anthony (Dixon) overcoming an indecisive senate, an elder statesman Cicero weighs in with Caesar’s adopted son and heir, Octavian. Oliver Johnston gives the proto-tyrant the purpose of a saint, and McCabe channels the misguided certainty of both Churchill and Blair as he unwittingly ushers another authoritarian state.

For all the pertinence of putting Harris’ books onstage, Poulton’s adaptation feels awfully pedestrian. The story moves at a lick, but to carve through so much plot, every scene becomes a signpost of an event. Characters speak for our benefit, subtext drops out and instead of an embodied plot, Poulton gives us a précis. That might have momentum, and Greg Doran’s staging runs at full-pelt, but it never builds up the head of steam it needs.
Instead, it’s all played on one level: a few bodies wielding torches stand in for huge mobs, Paul Englishby’s alarums sound like an adrenaline shot and powerful men plot their way to more power. You come to crave a sharp visual image, despite the impact of Anthony Ward’s impressive set. Two vast mosaic eyes peer down on Rome, a god judging history from one side of the stage, as we — the future — look on from the other.

It is, then, a political parable, and an accessible one too. McCabe gives a performance that’s complex and clear, charting Cicero’s missteps with a real lightness of touch. The smartness with which he plays the system, inching into corruption unawares, echoes that of our own neoliberal elites. As Tiro, Joseph Kloska’s a likable guide: ever-watchful as he hides behind a benign smile. Others are rather over-ripe: Dixon bellows like a barbarian hoard, and De Jersey’s Caesar seems to acquire superpowers, commanding respect with the palm of his hand. “Imperium” is insightful, but straight as a Roman road.

PRODUCTION: An RSC and Playful production of two play in three acts by Mike Poulton based on the books by Robert Harris.