Kim Kardashian West is having fun in the sun — and keeping up her neon streak.

On Thursday, the KKW Beauty businesswoman, 37, posted a sizzling new photo with pal Larsa Pippen, 44. The duo made the beach their photo shoot set, posing in neon bikinis and sleek shades. 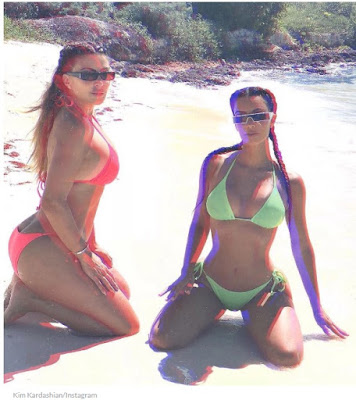 Kardashian West — who is the mom to Chicago, 7 months, Saint, 2½, and North, 5, with husband Kanye West — has been rocking tons of neon lately.

She recently played ball with her kids on the beach in a neon two-piece and bounced on a trampoline in a yellow bikini. In August, she showed off her diamond grill, slipped into a neon thong and wore a bright green wig in Miami and later received a neon green Mercedes G series SUV from West.

A source recently spoke with PEOPLE about Kardashian West’s flashy style, which she had scaled back after she was robbed at gunpoint in Paris in 2016. 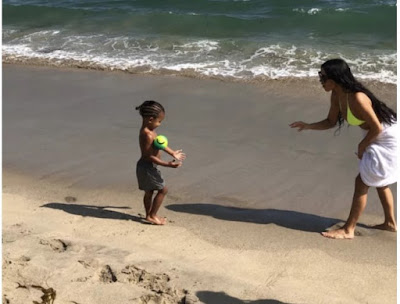 “She was toned down and out of the public eye after the robbery, but eventually she realized she needs to live her life,” the source said. “She has fun with fashion and style, and yes, it’s part of her image — to be glamorous and push boundaries. So she’s going to do it.”

Kardashian West flaunted her fit figure during her new beach outing — and she worked hard for it. In August, the Keeping Up with the Kardashians star said on E! News that she had lost 20 lbs.

“I’ve lost 20 pounds and I’m really proud of that. I was almost 140 forever, and now I’m like 116, and it just feels good,” she said. “I didn’t see results right away, but when you stick with something and you’re consistent, you will. So I love it.”

Kardashian West dished on how she did it: “I work out about an hour-and-a-half every single day, heavyweights. I don’t do a lot of cardio. But honestly, like even my mom pulled me aside maybe a week ago and pulls me in a closet and is like, ‘What are you doing?’ She says, ‘I don’t care what, I just need to know.’ I’ve been working out really hardcore with a bodybuilder for one year.”