A Private War is an American biographical drama film directed by Matthew Heineman and starring Rosamund Pike as journalist Marie Colvin. The film is based on the 2012 article "Marie Colvin’s Private War" in Vanity Fair Magazine by Marie Brenner. The film was written by Arash Amel and features Jamie Dornan, Tom Hollander, and Stanley Tucci.

Production
The film was shot in Jordan and then in London.

From Vietnam to the Iraq War, Hollywood has struggled to find the appropriate way to depict ongoing wars, typically taking years, if not decades, to put the proper perspective on modern political quagmires. In the case of such conflicts as the Arab Spring and the Syrian civil war — front and center in “A Private War” — the challenge is further complicated by Western forces being all but absent from the scene, making it difficult for American filmmakers to find fellow American heroes to shadow into that particular heart of darkness.

In his commitment to capturing the ongoing Syrian crisis, “City of Ghosts” director Matthew Heineman takes the next most logical route, building an incredibly sophisticated, psychologically immersive film around late real-life war correspondent Marie Colvin, the rock-star Sunday Times reporter fictionalized earlier this year in “Girls of the Sun,” and ferociously embodied here by Rosamund Pike. Best known as the porcelain sociopath in “Gone Girl,” Pike has been tackling increasingly impressive roles ever since: the scarred frontier mother in (and best thing about) last year’s “Hostiles,” tough supporting turns in terrorism dramas both fact-based (“7 Days in Entebbe”) and fictional (“Beirut”), and now this, a performance of raw, unrelenting conviction in which she comes across as dedicated to capturing Colvin for audiences as Colvin was to portraying the war for readers back home.

We’ve seen such journalist-crusader characters in films like Roland Joffe’s “The Killing Fields,” but what sets apart “A Private War” is how fresh it all feels (Colvin was killed during a bombing raid on Homs in 2012), and of course the idea that its seemingly fearless moth-to-the-flame hero happens to be female. There’s precedent for that, too, in the abrasively satirical, borderline gonzo “Whiskey Tango Foxtrot,” although here, Heineman treats the subject with the seriousness it deserves. While Arash Amel’s penetrating, inside-baseball script certainly acknowledges the absurdity of war, leaving room for moments of laughter and levity, it doesn’t dare treat what Colvin observes as a joke.

Spanning roughly a decade of Colvin’s career, “A Private War” captures how the horrors she witnessed managed to permanently sink their claws into her psyche, grappling with both Colvin’s idealism — her compulsion to share what she was seeing with the world — and the cynicism that eventually set in, as she realized that most Westerners would just as soon look the other way. As Colvin puts it in the film, the real difficulty about her job is “believing enough people will care when your story reaches them” — a challenge that applies to films like this one as well, considering that audiences tend to flee from anything so earnest as this, preferring escapism to movies that invite harrowing world events into our leisure space.

Thankfully, there is room for both in the world, and Heineman delivers a film that seems fully aware of the age-old paradox, attributed to Truffaut, that there is no such thing as an antiwar film. (“To show something is to ennoble it,” the French director cautioned.) “A Private War” manages to be simultaneously appalled by the humanitarian crises it depicts — these include visiting rebel Tamil Tigers in Sri Lanka, where Colvin lost her eye after being fired upon by the military; exhuming a mass grave of Kuwait POWs in Iraq, where she pairs up with freelance photographer Paul Conroy (Jamie Dornan); and reporting firsthand from Marjah in Afghanistan, Misrata in Libya, and finally, Homs in Syria — and honest about the thrill that visiting such hot spots offered to someone who found it hard to readjust to her life in London between assignments.

Heineman seems uniquely suited to such a project, having embedded himself with Mexican vigilante groups sworn to combat the local drug trade in his Oscar-nominated “Cartel Land.” (For his Syria-focused follow-up, “City of Ghosts,” the director featured firsthand footage from citizen journalists but never put himself directly in harm’s way.) As documentaries go, those two features were stunningly cinematic, bringing studio-level production value to dangerous real-world subjects. Now, in a remarkable transition from nonfiction to narrative filmmaking, Heineman does the opposite, using documentary techniques to bring gritty, you-are-there immediacy to Amel’s intense, unflinching screenplay.

With its tricky mix of sophisticated and stylish, “A Private War” would be right at home on a double bill with Kathryn Bigelow’s “Zero Dark Thirty” (in which the Jessica Chastain character was inspired by a female CIA operative whose identity remains classified). Both films challenge the idea that warfare is men’s work, though this one doesn’t feel compelled to idealize its protagonist. Better still, it allows Colvin to be every bit as rebellious, sexually liberated, and argumentative — or “difficult,” to flip the euphemism Hollywood executives level against independent-minded women — as male characters have been onscreen for decades.

Whether looking fearless in the field or made up to attend galas in her honor, Pike (who sports a black pirate-style eye patch and a gruff, no-nonsense voice) is never less than convincing, inviting audiences into the minefield of Colvin’s mind. At times, she’s haunted by flashbacks to the worst things she’s witnessed in her career — a young girl dying in the street, a metaphorical house under mortar fire — and though the device isn’t elegant, it allows Heineman to suggest how those experiences seep into her life back home, forcing their way into interactions with her editor (Tom Hollander) and edgy new lover (Stanley Tucci). Though on-location scenes are the most spectacular, “A Private War” is just as much about the idea of trauma and how a line-of-fire reporter like Colvin processes what she’s witnessed. 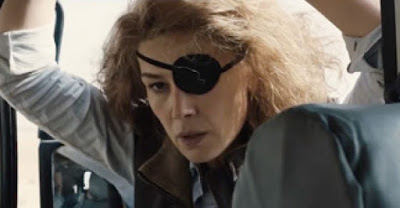 As her editor puts it, “no one in their right mind” would do what Colvin does, which reaches a pinnacle of insanity when she and Conroy go to Syria, where few Western journalists have dared. Colvin sent a powerful dispatch to CNN from Homs hours before she and Colvin were killed, and Heineman does her memory justice by dramatizing her all-consuming — and ultimately deadly — need to show the world that innocent women and children were being targeted by the Syrian regime. He also suggests what CNN has since reported: that she, too, became a target. But Colvin knew the risks and, despite the cost, would have insisted that our focus remains on the stories she was determined to tell.