Eminem produced music video director Joseph Kahn’s latest feature, which opened up the Toronto Film Festival's Midnight Madness section.
His palms are sweaty, knees weak, arms are heavy, but the scrawny white boy at the heart of Bodied, a new battle rap comedy from director Joseph Kahn (Detention), is definitely one of the fiercest lyricists seen on screen since Patti Cake$ rocked Sundance last year, or since Eminem took to the stage in 8 Mile back in 2002.


It makes perfect sense, then, that the Detroit rapper produced this high-octane, highly politically incorrect indie effort, which follows the rise of an unlikely hero as he bashes opponents with his ill rhymes, wicked insults and progressive politics (witness the Bernie sticker on his laptop). Yet unlike the real Eminem, Adam, as the young MC is simply called, is no kid from the streets: He’s a Ph.D. candidate in literature, specializing in the “use of the N-word in battle rap” and spitting out such improbable lyrics as “Talkin’ to the devil like Ivan Karamazov.”

There are dozens of other nods in this rather witty and energetic rise-of-the-underdog story, which was written by Kahn and Toronto rhymer Alex Larsen (aka Kid Twist) and features a cast of pretend and real-life battlers duking it out in a series of pugilistic verbal bouts. Those scenes are definitely the highlight in a movie that, at just over two hours, stretches itself a tad too thin by the last act and could have probably used some trimming. Still, the electric performances, countless cultural memes, and hip-hop–heavy soundtrack should all help propel it into theaters following a premiere in Toronto, where it arrived with a considerable amount of buzz.

Kahn, who’s directed videos for several major rap and pop stars (including Taylor Swift’s latest, which dropped a few weeks ago), knows how to get a party started onscreen, and Bodied doesn’t waste any time introducing its first battle. Set in an abandoned warehouse more worthy of a thriller than a concert, the fight shows reigning champion Behn Grymm (Jackie Long), whose Marvel-referenced name is intended, taking down a rival as graduate student Adam Merkin (Calum Worthy) stands in the crowd and explains the ordeal to his easily offended, way-too-PC girlfriend Maya (Rory Uphold).

Before we know it, the fight is over and Adam is out in the parking lot spouting his very own rhymes, which he didn’t know he had in him until, like some sort of Shakur-ian superpower, they took over his body and mind (with Kahn superimposing titles for effect). Soon enough, and much to the chagrin of Maya, he joins forces with Behn and a handful of other battlers from different backgrounds — one opponent refers to them as "the United Colors of Benetton" — including the Korean Prospek (Jonathan “Dumbfoundead” Park), the Ecuadorian Che Corleone (Walter Perez) and the rare female lyricist, Devine Wright (Shoniqua Shandai), in what’s essentially a man’s world. 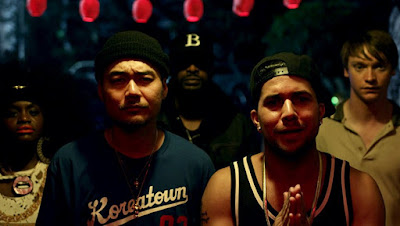 Indeed, Bodied tries to both embody the spirit of battle rap and critique it at the same time, with Maya calling her man out for the violence and misogyny present in many of the lyrics, while Adam’s whiteness is a constant source of conversation — not to mention ridicule for his adversaries in the ring. But the movie is very clear about which way it leans: in a battle anything goes — Asians take a particular beating, but every race is an equal opportunity target — because lyrics are far less dangerous than sticks, stones, and semi-automatic weapons.

Kahn and cinematographer Matthew Wise shoot each clash with tons of whip-pans and other swift camera moves to amp up the energy level, like we’re watching Fight Club without the beatings (although there are a few of those as well). The style works for the most part, but it can grow tiring by the closing reels, which run on for too long and try to neatly wrap up plot points involving Adam’s relationship with Maya, his star professor father (a rather hilarious Anthony Michael Hall) and Behn, who turns out to be another person when he’s not in the ring.

If the movie runs long in places, the vibrant performances from Worthy and the rest of the cast help push things ahead to the grand finale, and there are enough dynamo battles from start to finish to keep hungry rap fans satisfied. A busy soundtrack that includes songs by Dr. Dre, Wu-Tang and of course Eminem doesn’t hurt either, although their catchy beats wind up taking second billing to the true stars of Bodied: the words themselves.

Bodied is a 2017 American battle rap comedy-drama film directed by Joseph Kahn. It was written by Alex Larsen and produced by Eminem, his manager Paul Rosenberg, and Adi Shankar.[4] The movie first premiered at the 2017 Toronto International Film Festival.[4] The film stars Calum Worthy as Adam, a graduate student who becomes a competitive battle rapper after becoming immersed in the scene while working on his graduate thesis on the subject.[4]

Critical reception
The movie was met with critical acclaim, earning a 90% positive approval rating on Rotten Tomatoes, based on 29 reviews, and an average rating of 7.3 out of 10. The critical consensus states, "With its thorny themes and aggressive humor, Bodied dares to offend - and justifies its approach with a subversive comedy that edifies as it entertains." [8] Brian Tallerico, writing for RogerEbert.com, said that the movie "offers an entertaining window into a culture that most people probably know very little about, but it's also a clever take on a generation more aware of what's offensive and what's not than any before".[9] Barry Hertz of The Globe and Mail called the movie "an outrageous and outrageously entertaining treatise on cultural sensitivity"