Game Call Of Cthulhu review – the Not-So-Great Old Ones

Game Call Of Cthulhu review – the Not-So-Great Old Ones

H. P. Lovecraft is invoked for an ambitious new first-person horror adventure, but will it be anything more than a cult hit? Games Inbox: Would you watch a Nintendo Cinematic Universe?

Of all the pop culture icons to emerge over the last few years, Cthulhu is perhaps the most unlikely. As a cosmic entity beyond human comprehension, he personifies writer H. P. Lovecraft’s view of a universe that is totally indifferent to mankind’s existence, and where even the sight or knowledge of its secret horrors can turn a person instantly insane. 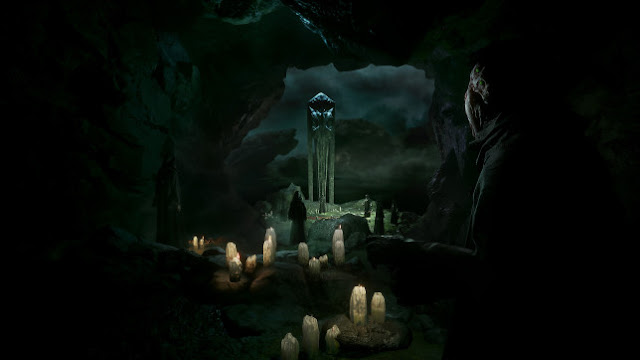 Not, you would think, the most marketable concept in the world and yet somehow Cthulhu plushies and POP! Vinyl toys stand as a testament to the fact that Lovecraft is now something close to mainstream entertainment.

He’s certainly more popular now than he ever was in his own lifetime and his influence has been particularly strong in video games. The peerless Bloodborne is the most acclaimed recent example but the original Alone In The Dark – the game that created modern survival horror and whose visuals and gameplay Resident Evil shamelessly copied – was heavily influenced by Lovecraft’s work, as was everything from GameCube classic Eternal Darkness to the recent Darkest Dungeon.
And yet Lovecraft himself is now seen as an increasingly problematic character given he was an unapologetic racist, extreme even by the standards of the early 20th century. Separating the art from the author is one thing but Lovecraft’s situation is complicated by the fact that his personal views on race and cultural superiority inspired a complexly written mythos where the whole of mankind was portrayed as being beneath the notice of god-like cosmic entities.

There’s relatively little overt racism in the stories themselves and yet his whole body of work is permeated by an obsession with physical, mental, and cultural degradation. But those uncomfortable knowing the background of the man may choose to comfort themselves with the fact that most of his stories are… not very good. A few, such as The Shadow over Innsmouth and The Colour Out of Space, are genuinely effective horror stories, but his style of writing was viewed as archaic and plodding even at the time. Discussing H. P. Lovecraft and his influence is a fascinatingly difficult subject, but the fact is most of the best examples of ‘cosmic horror’ – both games and otherwise – are influenced by his work rather than direct adaptations of it. 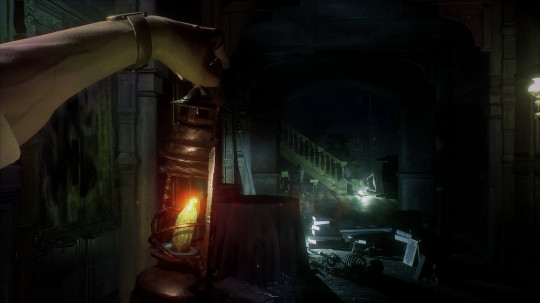 Those games that do directly reference him usually come by way of the Call of Cthulhu tabletop role-playing game, rather than the original text – which is also the case here. The game casts you in the role of a private detective in 1920s Boston, who after the horrors of the First World War is already half out of his mind on drugs and booze. On the verge of being dropped by his agency, he takes on the case of the Hawkins family, who were all seemingly burned to death in a fire. The exact details of what happened are unclear though and complicated by Mrs. Hawkins’ peculiar paintings and the religious cult both parents seem to have been involved in.

Call Of Cthulhu is a difficult game to pin down in terms of genre. It’s viewed from the first person and has elements of role-playing, stealth, and occasional action. But its closest resemblance is to an old-fashioned graphic adventure, although like all the other aspects of the game both the puzzles and character interactions are very simplistic. The graphics are similarly basic, with some really terrible animation, but they at least are at the mercy of an obviously meager budget. Nevertheless, the game does very well in conjuring up a tense atmosphere of unease and uncertainty.

Madness was always an obsession of Lovecraft (both his parents were committed to mental institutions) and like many games inspired by his work your character is not only in constant danger of being driven mad but you, and he, can frequently not trust anything you see. Call Of Cthulhu (PS4) – you’d be mad to dismiss it completely In certain sequences you’re obviously dreaming or hallucinating, but there are other more subtle instances when images flash onscreen and are gone in an instant or strange shadows suddenly disappear out of sight. It’s here that the game is at its most effective, as you genuinely question whether what you saw was real or just your imagination. Although we’d hesitate to call this a full-blown survival horror as while there are a number of genuinely frightening moments it’s generally more of a slow burn than a parade of jump scares.

What drags the game down, far more than the simplistic visuals is how basic the gameplay is. There’s what at first seems a relatively complex skill tree to unlock, which allows you to resolve encounters in various different ways, from strong-arming your way through to relying on puzzles or bluffing your way out via dialogue. But you soon begin to realize that which you choose is merely window-dressing and makes no real difference to the unfolding plot.

There’s also a sort of detective vision ability not dissimilar to the Batman: Arkham games, where you try to reconstruct crime scenes, but it requires no skill or thought other than wandering around the room looking for interactive objects. The dialogue is also uniformly unconvincing, betraying the fact that French developer Cyanide was not working in their native language.

Ultimate Direct announced for Thursday As with most low budget games trying to punch above their weight it’s easy to make excuses for Call Of Cthulhu and appreciate what it gets right rather than its many, possibly unavoidable, mistakes.

That said, the charm does begin to fade the longer it goes on, and the more contrived the plot gets. As with anything horror-related, the more familiar you become with what’s going on, the less scary it seems and the last few hours of gameplay become something of a slog. That makes this a very difficult game to recommend at full price but if you find it on sale, and understand its limitations, it’s interesting despite its flaws – much like a lot of Lovecraft’s original stories.