The Nutcracker and the Four Realms (2018) - Movie Review

Review Movie The Nutcracker and the Four Realms (2018)

The Nutcracker and the Four Realms is an upcoming American fantasy adventure film directed by Lasse Hallström and Joe Johnston and written by Ashleigh Powell and Tom McCarthy. It is a retelling of E. T. A. Hoffmann's The Nutcracker and the Mouse King and Pyotr Ilyich Tchaikovsky's ballet The Nutcracker, about a young girl who finds a Nutcracker doll among the family's gifts and is charged by her parents to take special care of it. The film stars Keira Knightley, Mackenzie Foy, Eugenio Derbez, Matthew Macfadyen, Richard E. Grant, Misty Copeland, Helen Mirren, and Morgan Freeman.


Trailer Movie The Nutcracker and the Four Realms (2018)

The film was announced in March 2016 with Hallström directing a script by Powell. Much of the cast signed on that summer and filming began in October at Pinewood Studios, lasting through January 2017. In December 2017, it was announced Joe Johnston would direct a month of reshoots written by McCarthy, with both men eventually receiving co-credits for directing and screenplay, respectively.

The Nutcracker and the Four Realms is scheduled to be released by Walt Disney Pictures in the United States on November 2, 2018, in Real D 3D and Dolby Cinema. 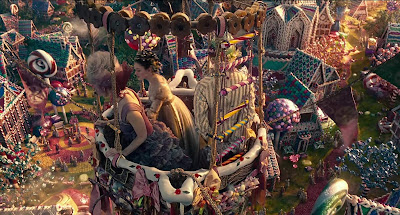 Filming began in October 2016 in South Kensington and Pinewood Studios in England and wrapped in late January 2017. In December 2017, it was reported that Joe Johnston would helm 32 days of reshoots, scripted by Tom McCarthy, due to Hallström being unavailable. Hallström would still oversee post-production. It was later revealed that Hallström and Johnston had voluntarily decided to receive a joint directorial credit for the film.

Music
The music was adapted from Tschaikovsky's Nutcracker by James Newton Howard. Gustavo Dudamel conducted the orchestra, while Lang Lang was the piano soloist. Andrea Bocelli and his son Matteo contributed the song "Fall on Me" for the film, which premiered on Dancing with the Stars' "Disney Night" on October 22, 2018.

Release
The Nutcracker and the Four Realms is set to be released on November 2, 2018, in 2D and Real D 3D by Walt Disney Studios Motion Pictures, replacing the original date set for Disney's live adaptation of Mulan. The teaser trailer was released on December 19, 2017. Another trailer was released August 8, 2018. Two days later, on August 10, 2018, a sneak peek of the film aired on Disney Channel during a new episode of Andi Mack. There was also a trailer that first came out in theatres with showings of Incredibles 2, Ant-Man and the Wasp, and Christopher Robin before going online on September 4 of that year.

Box office projections
In the United States and Canada, The Nutcracker and the Four Realms will be released alongside Nobody's Fool and Bohemian Rhapsody and is projected to gross $23–26 million in its opening weekend.