ORCHARD PARK, N.Y. – There’s no team in the NFL that Tom Brady has vanquished more times than Buffalo.

There’s no team that Rob Gronkowski seems to dominate more than his hometown Bills.

Even without linebacker Donta Hightower – a surprise late scratch with a knee injury – and productive rookie rusher Sony Michel, the Patriots entered this rare Monday night visit to Western New York with a decided advantage over a reeling Buffalo squad ranked bottom of the league in offense. 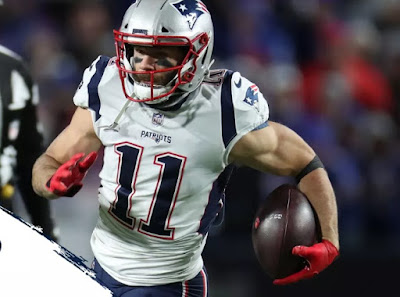 After 15 minutes of play, though, the Patriots held only a 3-0 lead.

New England offensive coordinator Josh McDaniels tried to compensate for the absence of Michel by lining up wide receiver Cordarrelle Patterson in the backfield for several plays on the first couple of drives. Patterson has carried the ball on end-around plays frequently this season, but this was his first extended action in the backfield taking traditional handoffs.

“When my number’s called, I’ll be ready. Josh did a hell of a job getting me back there and trusting me,” Patterson told reporters after the game. “I had 10 carries tonight. I’m thankful for that.”

Stiff winds off Lake Erie didn’t help the passing game, as several of QB Tom Brady’s early throws sailed wide or short of their intended targets. When Buffalo had the ball, the Bills tried to counter this by running Wildcat running plays with their ball carriers. It helped generate some yardage and a bit of buzz in the sold-out New Era Field crowd, but the Patriots defense forced Buffalo to punt twice.

On offense, New England eventually found openings in the passing game, driving deep into Bills territory, but the first half proved little more than a kickers’ dual. The Patriots could only manage a few Stephen Gostkowski field goals (he also pushed one wide right from 50 yards), and Buffalo snuck one in to make the score 9-3 at intermission.

Most of the third quarter looked like more of the same.


Buffalo got some bad luck in the second half when the Bills lost perhaps their best defensive player, linebacker Tremaine Edmunds, to a concussion. New England also suffered the loss of right guard Shaq Mason (calf).

Though they gave up some big play, the Patriots defense also made some of their won. Safety Patrick Chung recovered a third-quarter Kyle Van Noy strip-sack of Bills QB Derek Anderson deep in Bills territory, but once again, only came away with three points from Gostkowski.

“We continued to turn over the ball and stop the run. I feel like we did a pretty good job [tonight],” Van Noy maintained.

“Defense made some huge plays, some big stops,” Edelman continued. “We were able to make some long drives. Unfortunately, we didn’t do that well in the red area. We actually did terrible, but we took care of the ball. We didn’t turn it over, which was good against a defense that gets the ball out. Buffalo’s been good at that this year.”

Despite frequent pressure from the Bills’ front, Brady and the offense were able to move the ball between the 20s most of the night. They just couldn’t finish drives with touchdowns. Gronkowski made a few grabs, but didn’t seem like his usual rambunctious self.

Time after time, though, when Brady needed bailing out, he found trusty teammates Julian Edelman and James White. The tandem combined for 19 catches and 183 yards of offense.

“Tom’s just finding the open guy,” White explained later. “We did a good job against their zone defense. Sometimes, you have to run a second route or keep running allow Tom the time to find you. Once you get the ball, just make a play.”

And just when it appeared the Bills were in position to mount a possible comeback, safety/co-captain Devin McCourty baited Anderson into throwing an interception on a seam pass that McCourty took 84 yards for a game-sealing score.

This wasn’t a typical Gronk night in his hometown. Nor was it a typical night for New England’s offense. It was ugly. But whether it was Patterson as a running back, Edelman and White coming up big, or the defense making a couple of timely plays, the Patriots, as they so often do, found ways to make the most of limited opportunities on both sides of the ball and leave town with yet another win.

“Every time we play [the Bills], it comes down to the wire,” added White. “This is the type of game we expected. I’m happy we came out with a win.”