Blizzard games have staying power. They're incredibly well crafted and designed to run on a wide spectrum of Windows PCs and Macs, both low powered and high. New content? They're all over it. I can't think of a single one of their titles that haven't received multiple updates, oft-times for free, in the past decade. 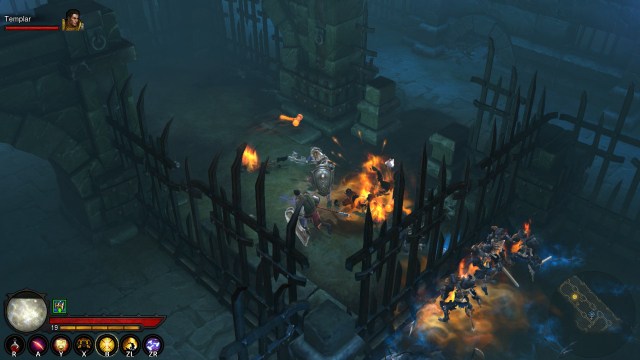 I played Diablo III on my Mac. When it came out for PS3, I played it there, too. It's a game that I return to time and time again, not because it is particularly challenging, but because of the grind: there's always something new to find--a new piece of gear that'll give the character that you're playing a slightly different way to play. So, when I tell you that Diablo III Eternal Collection for Nintendo Switch is pretty much the same deal as Diablo III played on any platform, you'll understand that what I actually mean is that it's great.

I've always preferred playing Diablo III with a game controller over a mouse and keyboard. I like that a wee flick of the right thumbstick will send my hero rolling out of the way of danger. This was one of the first things I tested when I loaded up the copy of the game that Blizzard sent to me last week. The thumb-flick works with the Switch. The rest of the game's controls are similar to what I remember from my PS3 as well. You can't remap your controller's buttons, but your powers and attacks are laid out well enough in the game that it's not a hassle to use them, arbitrary or not. My first few minutes with the game seemed familiar. Back to New Tristam. Back to the cathedral. Given that I've played the game for so long, on so many different platforms, I suspected that it'd be hard to invest this time around.


I was wrong.
Diablo III could well be a perfect game for the Switch. It loads quickly, ready to play in minutes. The console's ability to hibernate makes it possible to put the game down with a push of the button. Have a few minutes to kill? Push the same button and kill a few demons. Coming back to the game after a week of adulting works too. The plot of the game, while well developed, is simple. So too the constant quest to murder the enemy and collect loot. You can't forget what you were doing in-game because you're always doing the same thing. Sit back down, start your Switch up and get playing. I can't say the same for games like LA Noire or Skyrim--a week away from those and I'm lost. 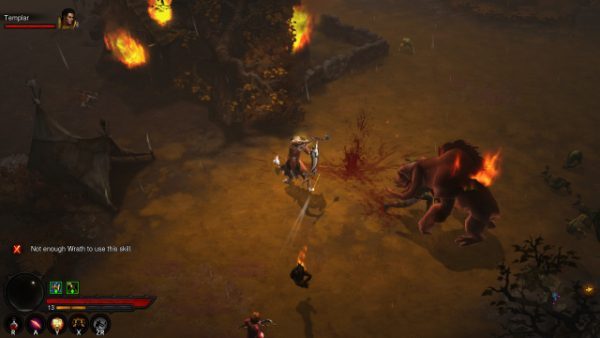 I find that playing the game on the Switch's wee display helps me to focus more on the game. There's a lot going on in this game, from a graphics standpoint. While the Switch's display might not be the best out there, its compact size allows me to appreciate every iota of art that Blizzard's team poured into Diablo III. Of course you can play it on your TV too. If you plan to hunker down with friends for a bit of demon hunting, it's the way to go. Due to the limited number of buttons on each joycon, and the size of them, I found doing so a lot less enjoyable than playing in portable mode. However, it's an issue that could be quickly cleared up by bringing a Pro Controller or two into your life. If you're thinking of getting your game on with a pal using your Switch's display, maybe don't: while its dimensions are great for single player gaming, it's just too small to enjoyably support two players. Diablo III allows for online multiplayer and LAN play as well. I didn't get to take either of these for a spin. I suspect, however, with the port being made by Blizzard, that it'll work just fine.

One of the best bits about the port of this game to the Switch is that, with the exception of playing any seasonal characters that you may have rolled, the whole damn thing can be played offline. For anyone that travels by air as much as I do, this is a huge win.

I can say, without reservation, that Diablo III has been the most fun that I've gotten out of my Switch since I bought it this past summer.