Eternal Collection review: The definitive way to play Diablo
This game was made to be played portably, we just didn't know it yet.

While Diablo 3 is six years old at this point, it's one of those games that are timeless to me. It first came out in 2012 for the PC and Mac, and then came out on consoles in 2013. I've played the game on both my Mac and PlayStation 4, with hundreds of hours total on each version, and I still can't get enough.


I take breaks with my Diablo obsession, going for weeks or months without playing before getting back into it. I just don't tire of playing it, in all honesty. But there was always one problem: Diablo 3 on computers and consoles was never portable. That's what's been missing in my life: a portable version of Diablo.

But now Diablo 3: Eternal Collection is on the Nintendo Switch, the hybrid home console and handheld portable system, and my dreams have come true. Yes, it's finally possible to play a full-fledged Diablo game while you're on the toilet. No, I wouldn't do that personally (too many dirty germs for my Switch), but I know many people have been wanting to do that.

This is the definitive version
Even though Diablo 3 is six years old, the Eternal Collection for Nintendo Switch is $60, like every other major release. While that may seem like a lot for an old game, let's break down why it's not a bad price. 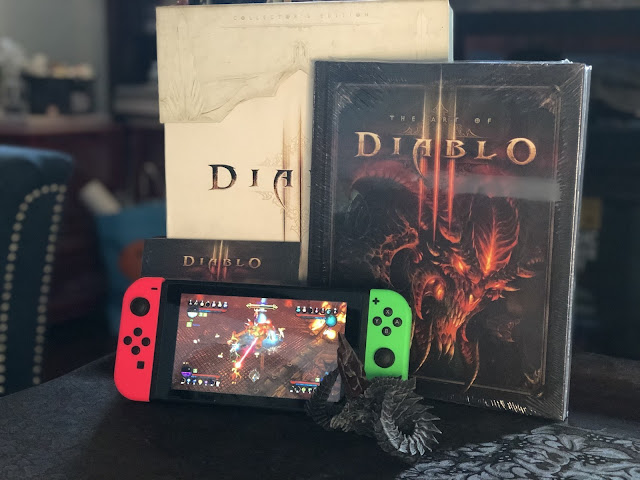 So the $60 price tag for the Switch version is about what you would have paid to get it on other systems before, but you get everything, and then some. The Switch version of the Eternal Collection has a full Ganondorf transmogrification set, a Cucco pet, a set of shadowy purple wings meant to feel like The Legend of Zelda: Majora's Mask, and a Triforce character portrait. It also includes a Starcraft pet and Mercy (Overwatch) wings that came from earlier versions of the game and the skeletal wings with the Rise of the Necromancer. 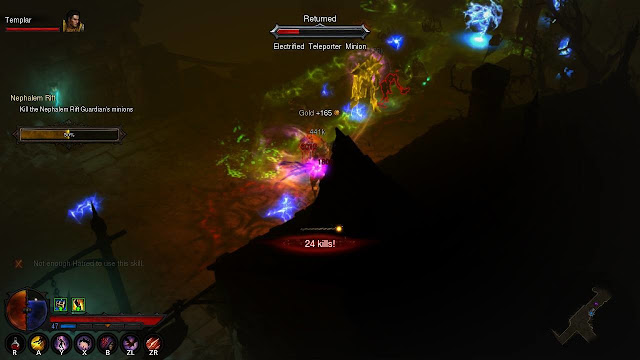 I've bought the collector's edition of the original Diablo 3 for PC when it came out, the Reaper of Souls expansion on PC, the Ultimate Evil Edition for PlayStation 4, and the Rise of the Necromancer DLC on PlayStation 4. I've spent a lot on Diablo 3, but I would easily just drop another $60 on the Switch version too, because it comes with everything and being able to slay demons as Ganondorf, I mean, how do I pass that up?

Diablo was made for a portable
As much as I loved playing Diablo on my MacBook Pro and PlayStation 4, my biggest gripe was the fact that I couldn't take the game with me anywhere and play whenever I felt like it. Yes, my MacBook Pro is portable in a sense, but it's large and bulky compared to a handheld, and I don't have a PlayStation Vita to stream Diablo 3 onto. 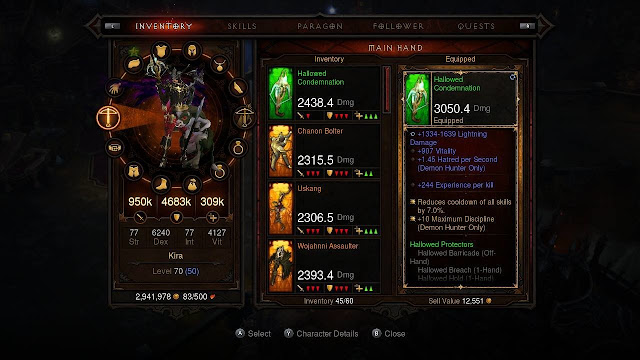 Once you reach endgame content in Diablo 3 (reach level 70), the game is all about grinding for Paragon levels and Legendary/Set equipment. This means tearing through Greater Rifts, Nephalem Rifts, and bounties in Adventure Mode as fast as you can, over and over, in search of the perfect gear. For me, this is something I want to do while having some background noise, like a movie or television show.

That's hard to do with a computer or a console that uses the television. But the Switch version allows me to play in Handheld mode, which has been the way I've been playing the most, so I can still watch something while playing.

Or say I'm on a long road trip in a car, flying in a plane, or commuting by bus or train—that time can be spent going for some Rift runs in Diablo 3, farming for gear. Runs don't take too long if your gear is pretty good, and it's easy to fit a few runs in whenever you can. 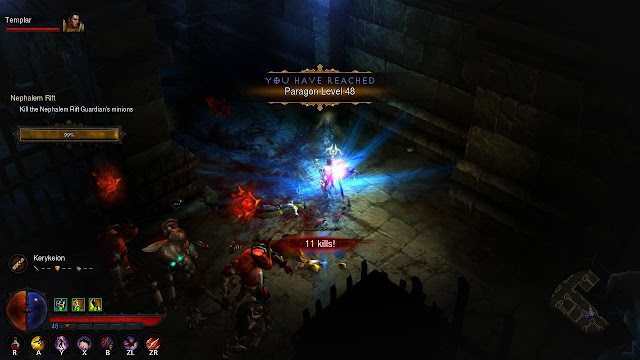 I spent many hours on my PlayStation 4 just farming gear and trying to get the perfect set, but I hated the fact that I was literally bound to my room, and couldn't leave the house. Now, I can take Diablo 3 with me and magic find anywhere! Diablo is the perfect kind of game to play while you're out-and-about with some downtime.

The only thing about playing Diablo 3 in handheld mode is the slight drop in graphical quality, from what I've noticed. Especially in Act V, the town looks a bit fuzzy compared to the rest of the game. If you play in Docked mode on a TV, the game looks a lot better, almost as good as PlayStation 4. The frame rates also feel better in Docked mode, but it's not terrible in handheld mode.

Choose how you want to play
When Diablo 3 first came out, you only had the story mode, and you basically just replayed it over and over if you wanted to make a new character. Or if you wanted to grind for gear, you'd farm certain areas in chapters that had the most loot and rewards to reap. 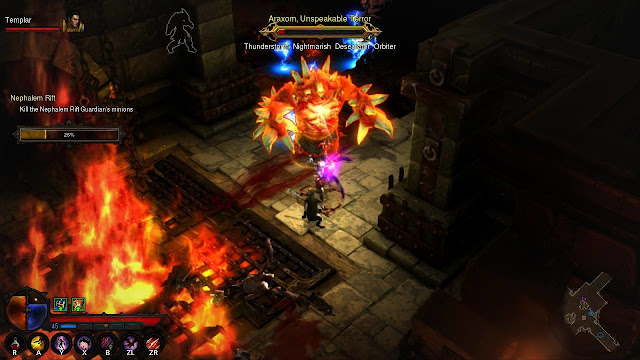 Now, players can choose to start with the classic Story Mode, or go for Adventure Mode, which focuses on "bounties and exploration." Adventure mode is the faster way of leveling up a character since you have access to Nephalem Rifts, which are randomized dungeons with the goal of defeating enough enemies to bring out the Rift Guardian, who has a lot of loot drops for you once they're defeated.

Nephalem Rift guardians also drop Greater Rift Keystones, which you need to open up Greater Rifts. The difference between Nephalem Rifts and Greater Rifts is that the latter is timed, and you must defeat enough minions to bring out the Guardian before time runs out if you want the bonus Legendary Gem upgrade. Greater Rifts played on Torment 1 or higher difficulty is also when you get more Set armor and weapon drops due to the challenge.

If you clear out some Greater Rifts, then Challenge Rifts unlock, which are copies of a Greater Rift completed by someone else. Think of it as a "snapshot" of someone's Greater Rift, where the dungeon is recreated exactly as the original player's, and you get to play as their character, complete with Paragon levels, skill loadout, and equipment. The objective is to try and beat their time for rewards, and the class order is as follows (rotates every week): Demon Hunter, Necromancer, Barbarian, Wizard, Monk, Witch Doctor, and Crusader. 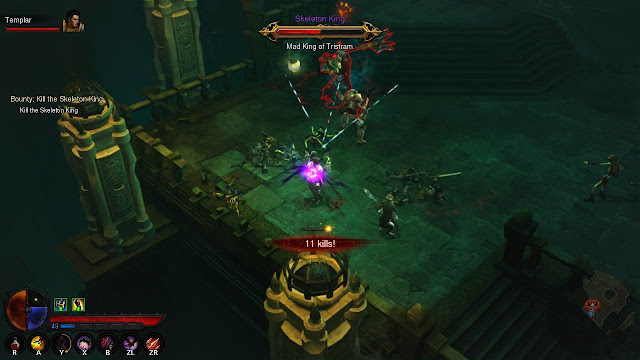 Bounties are goals on each chapter's map (five each, so 25 total) that you'll want to complete, though I've always found them more tedious than Rifts. Once you complete all bounties in a chapter, Tyrell gives you a Horadric Cache, which is full of useful crafting mats, gems, and magical items, with a chance to get legendary or set gear.

If you've never played Diablo 3 before and want to enjoy the story, then you can take a break from the fast-paced action of Adventure Mode and dive into Story. It's definitely a lot slower-paced comparatively, but I always found the story and lore behind Diablo interesting, so I always play through it.

Grab a friend and slay evil
One of the best things about playing Diablo 3 is having a friend join you. The Switch version also supports local couch co-op so you and up to three people can play on one device at the same time. I've only tested it with two people, and it works flawlessly like it did on PlayStation 4. 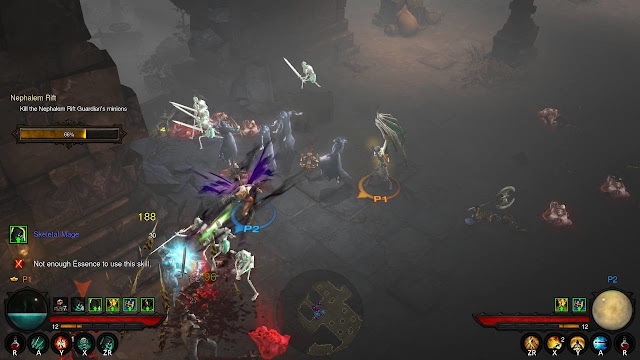 When playing on a single screen, both players are on the map at the same time. When one player opens the in-game menu to change gear, skills or interacts with an NPC, it takes up the entire screen, giving the other player a quick break.

There is also support for online play if you have Nintendo Switch Online, and up to four players can play together.

Let's talk about those controls
If you've played Diablo games on a computer, then you're used to the point-and-click nature of everything. For those who have played Diablo 3 on the consoles, then the Nintendo Switch controls will be the exact same. 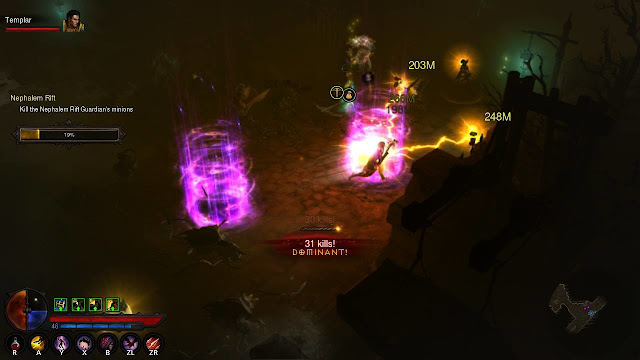 You'll move around freely with the left joystick. The right joystick allows you to perform an evasive dodge maneuver, which is something I don't think the PC/Mac versions had, at least when I played it. You can assign a skill or ability to the ZL, ZR, A, B, X, and Y buttons and use them as you desire. The circular menus for inventory and gear feel more intuitive to me than the PC version, and it works out nicely on the Switch.

I did notice that some buttons felt a bit unresponsive when using my Pro controller in Docked mode. For example, I was trying to use my primary skill with A, and my thumb was pushing the button down, but my character didn't seem to do anything for a moment. Not exactly game breaking, but noticeable.

It's time to save Sanctuary from the Prime Evil 4.5 out of 5
This is my third time playing through Diablo 3, but I don't mind. I can finally play it while I'm out-and-about, and that's pretty much all I've been wanting from Blizzard. Diablo 3 is perfect as a portable game, and a great way to pass the time when I have nothing else to do.

Now, I'm eager to hear what Blizzard has in store for Diablo 3 fans at Blizzcon this year—hopefully a new expansion or character class?