First in state in 74 years, Utah man dies from rabies;

First in state in 74 years, Utah man dies from rabies

SALT LAKE CITY — A Moroni man has died from rabies, the first death of its kind in Utah since 1944.

Gary Giles, 55, died Sunday but struggled for weeks with a slowly progressing disease that doctors couldn't stop from infecting his brain and other organs, ultimately leading to his death.

He and his wife, Juanita Giles, didn't realize that the bats that had frequented their home were carriers of a rabid and highly contagious virus.

"The bats never hurt us, and we were always catching them in our hands and releasing them outside because you hear all the time about how bats are good for the insect population, and you don't want to hurt them," Giles said Thursday.

"The bats would lick our fingers, almost like they could taste the saltiness of our fingers, but they never bit us." 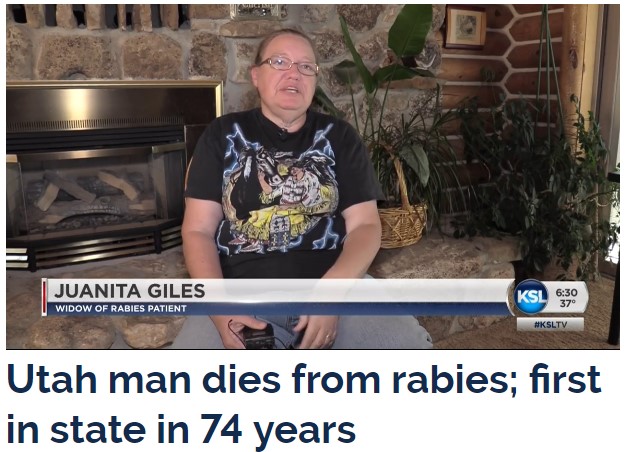 Gary Giles first had neck and back pain and went to the local emergency room on Oct. 19 and was sent home with steroids and other pain management treatment for a potential pulled muscle; but that turned into numbness and tingling, and, eventually, wheezing. His wife called 911 and he was taken by ambulance to another local emergency room.

He was again transported to Utah Valley Hospital and then put in the intensive care unit at Intermountain Medical Center in Murray, where he died.

"It's very scary and it is creating a bit of a panic," Giles said, adding that she is getting rabies vaccinations — a series of four shots over two weeks — just in case. Other family members are also getting vaccinated, though the supply of vaccine is limited within the state.

She wants others to be aware of the risk.

"I had no clue," she said. "We would wake up in the night and they would be walking on our bed."

"I've always thought bats were kind of cute, but I had no idea the kind of risk we were at," Giles said.

A fundraising page* has been set up to help the family.

"My dad has always been a giver," Crystal Sedgewick, Giles' daughter who set up the page said. "During the final 24 hours that he was still able to speak with us, he was in a delusional state, and he still couldn't stop talking about all the people that he needed to help and favors that he had yet to follow through with."

She said it is difficult for the family to ask for or accept anything.

Bats are the most common source of rabies in Utah, Utah Department of Health epidemiologist Dallin Peterson said. He said a bite or scratch from a bat may not be felt because a bat's teeth and claws are very small.

The disease, as is likely with the case of Gary Giles, can also be transmitted via an infected animal's saliva.

Rabies, though very rare, Peterson said, is nearly always fatal once symptoms develop. The last deadly case in Utah was 74 years ago.

After exposure to an infected animal, Peterson said it can take three to 12 weeks for symptoms to show up. From there, it can be less than a week until a person is in a coma.

"Once it gets into the central nervous system, it advances quickly," he said. "It's a terrible way to pass away."

Between 150 and 200 bats are submitted to the health department every year to be tested. Migratory bats come from all over the state, most frequently stopping along the Wasatch Front. A hibernating kind of bat is also found in some national parks.

"They like nooks and crannies or caves, dark areas or attics," Peterson said.

This year, 14 bats tested by the health department have been found to have rabies. The state averages 20 to 25 positive tests each year.

In the fall of last year, bat infestations were found in West and Layton high schools. Because bats are endangered, they should not be killed but dealt with by a professional. No one was harmed in the process, and houses were built to attract the bats outside of the school.

"If you find yourself near a bat, dead or alive, do not touch, hit or kill it," Peterson said.

While no human-to-human transmission has been documented outside of organ transplantation, he said it is "theoretically possible" to spread rabies through contact with bodily fluids such as saliva and tears, as well as cerebrospinal and respiratory tract fluids.

Rabies is not found in urine, blood, serum or feces.

Peterson said the health department hasn't confirmed that the Utah man died from exposure to an infected bat, but a Center for Disease Control and Prevention laboratory in Atlanta can detect the species.

An estimated 40,000 people in the United States get preventive treatment for rabies after a bite or scratch from a dog or cat that might not be up-to-date on vaccinations. The Utah Department of Health advises keeping up on rabies vaccinations for all domestic animals, not only for the sake of human owners but to avoid the heartache of unnecessarily euthanizing or treating pets.

The health department advises people to not approach wild animals or strays, which can also carry the highly contagious and fatal viral disease.

Domestic animals with rabies may exhibit behavior changes, general sickness, trouble swallowing, increased drool or saliva and biting at everything.