More of the same isn’t usually a cause for celebration, but Hitman 2 is a rare exception. The sequel to developer IO Interactive’s episodic reboot of the assassination series almost didn’t get made after lower-than-expected sales and a breakup with publisher Square Enix. But IO secured the rights, partnered with Warner Bros. Entertainment, and came back two years later with the most refined, expansive, and enjoyable Hitman title to date. It’s a completionist paradise that offers dozens of hours of trial-and-error entertainment in giant environments, all with the same high-fidelity graphics and underlying engine governing what you can and cannot do to a refreshed list of unsuspecting and often bumbling villains. 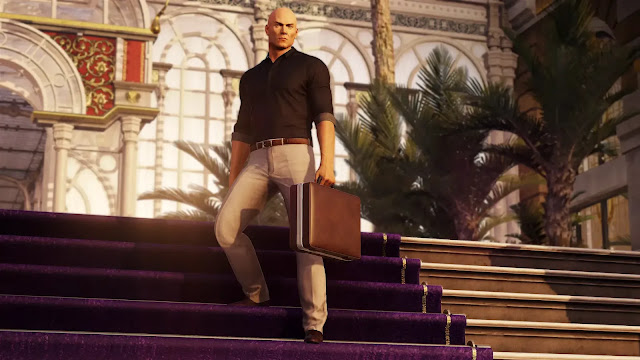 I may be in the minority of players who truly loved the episodic nature of 2016’s Hitman. Given that the game was just six levels, having one arrive each month made for the perfect pacing, so I could fully immerse myself in a new map without distraction. Hitman 2 is not episodic. In fact, you can play through any of the levels in any order, with only a small spoiler warning to dissuade you. Other than that, the two games are nearly identical, down to a similar menu layout and challenging structure.

The real differentiator is in the locales. Hitman 2 introduces six new environments for the titular barcode-branded killing machine to explore, each with its own signature hook. In Miami, Agent 47 is tasked with taking out a billionaire tech CEO and his racecar driver daughter in the midst of an actual race. In Mumbai, you can aid an up-and-coming assassin in taking out all of your targets by making him look like a flawless expert in the craft when in reality, it’s you laying the groundwork for his success. In Whittleton Creek, Vermont, a throwback to the classic Hitman: Blood Money’s “A New Life” mission, you trade the heavily guarded office buildings and luxury private party scene of your typically wealthy targets for quintessential Northeast suburbia. 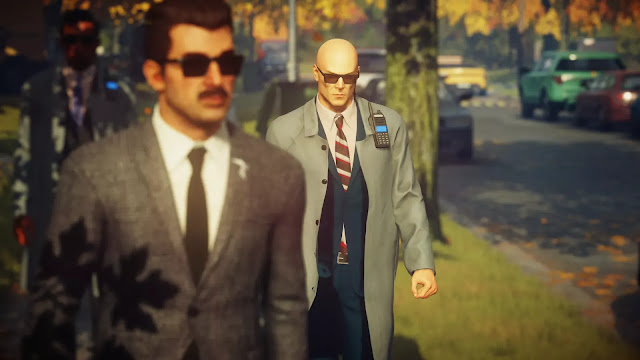 This isn’t a game you play for the story. Once again, Agent 47 and his handler, a high-ranking operative in the fictional ICA assassin organization, find themselves caught in a confounding power struggle between two shadowy groups that run the world in very Bond-esque conspiratorial fashion. This time around, there’s added tension because one of the villains has information on Agent 47’s past, a long-running series mystery that seems to get murkier with every entry.

While the overarching plot might not win any awards, IO does a good job of creating backstories for your individual targets. Much of the writing is actually impressively timely, with nods to real-world concerns about private military corporations, Middle Eastern conflicts, and even artificial intelligence. More fun is all the little conversations you can overhear by eavesdropping on non-playable characters. There are plenty of hidden Easter eggs that allude to world events and pop culture as well as callbacks to previous missions in earlier games, so long as you’re willing to spend some time as a wallflower, waiting for the characters to cycle through the script.

That’s all just window dressing, though. Hitman 2 is a game about killing, and IO has mastered the tone required to turn the game industry’s most transparent murder simulator into something simultaneously grizzly and silly, like a cross between a slapstick comedy and Final Destination. Hitman is at its best when it divorces itself from the on-screen violence and instead treats the experience like an absurdist playground. The sequel does this particularly well.

Much of the game’s traditional and more brutal touches remain intact as a tribute to the franchise’s roots. The default assassination method remains to garrot people with a line of tempered high-carbon steel — unlocking the “piano man” challenge, naturally — and it’s always unpleasant to watch. Many of the game’s more bare-bones completionist challenges, like killing your targets with a sniper rifle only or doing an entire mission in your signature suit without ever being seen, are aptly referred to as “the classics.”

You can play the game with those goals in mind, and Hitman diehards and speedrunners have plenty to work with when it comes to completing these challenges in the most efficient and calculated ways possible. But Hitman 2, even more so than the episodic reboot that brought the series back to life after four years, relishes in the absurd and the hilarious. The dozens of challenges in each of the new levels almost always reward constant experimentation over speed and skill. 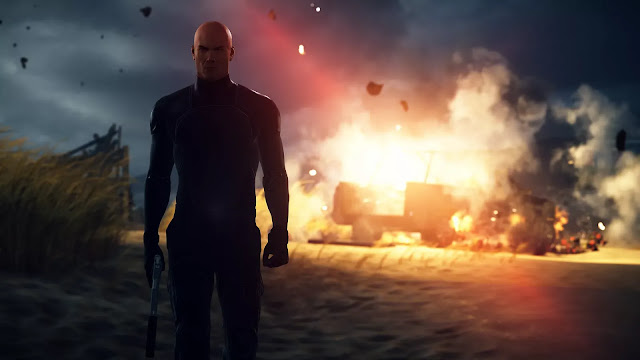 For instance, in the game’s introductory Miami level, I was intrigued by one of the “mission stories,” a reworked version of the 2016 game’s “opportunities” feature that basically handholds you through a more complicated assassination to help you get your footing. This one happened to feature an autonomous robot prototype that was being tested for a representative of the US military by tech executive Robert Knox, a man so confident in his creation that he’s willing to stand alongside the test dummies during a live demonstration.

The mission story got me in the room with Knox, but it didn’t tell me what to do after that. I had to explore to find out how to trick the robot into turning Knox’s participation into a fatal mistake. Thankfully, a copy of Wired magazine with Knox’s face on it was left in the reception area of the second floor, and it was enough to fool the robot’s facial recognition system into identifying its overlord as a hostile. While the technicians freaked out over yet another “malfunction,” I was able to escape, having earned extra points for an accidental kill and for never blowing my cover.

In this way, each Hitman 2 level has a natural flow to it. You jump in and feel immediately overwhelmed by the sheer scale of the environments and the hundreds to thousands of NPCs inhabiting them. But as you get the lay of the land by exploring the map, you come across a mission story playing out in front of you and decide to follow along. Those mission stories are low-hanging fruit, but they help you learn how your targets move, what their main paths and storylines are, and the different ways you can improvise. To draw Knox away from his robot demonstration, for instance, you can tinker with one of the racecars he puts on display in the first floor of the building, bringing your target into very close contact with an active combustion engine.

Want to knock out the challenge for drowning your target in the toilet, poisoning their cup of tea, and doing it all while wearing the goofy flamingo mascot disguise? By completing a mission story, you’ll likely see the point at which your target fixes themselves a drink, and on a second playthrough, you can wait for the perfect moment to execute the maneuver. (Your targets in Hitman are always thirsty, it seems.) Complete enough challenges and upgrade your “mastery” level from level 1 to level 20 for each map, and you can even start over wearing your preferred disguise in a more suitable location with your weapon of choice already equipped.

It’s clear IO is leaning heavily into the art of save scumming. If something unexpected happens — and, in Hitman, something unexpected always happens — you just reload and try again. Hitman 2 now features more efficient saving and reloading and an easier-to-understand autosave and manual save menu. That way, you can store up saves at critical junctures in a mission to try one tactic and then come back and try another later on. Or if you find yourself attempting something particularly tricky, like sneaking into a secure location without wearing the proper disguise, you can have a clean save to fall back on.

The save system is not quite as sophisticated as, say, Dishonored 2, which had quick-save and quick-load functions that worked much more quickly and an active stat counter for checking whether you’d ever been seen. But Hitman 2 is still more accommodating than its predecessor in this regard, and it’s nice to see IO tailor its systems to the way its hardcore fans like to play without compromising how more casual players want to experience it. 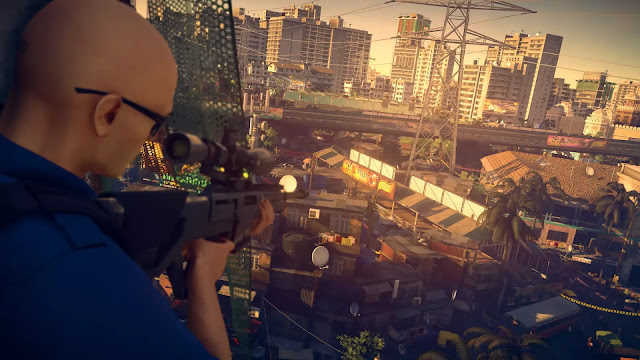 You can use firearms indiscriminately, earning you the attention of a small army of NPC soldiers, or you can knock out an entire room full of guards from the shadows using a healthy supply of wrenches you’ve scavenged. The only way the game really punishes you for excessive violence or sloppiness is with a final score tally and a subpar rating out of a total of five stars. The score is mostly for leaderboard bragging rights; IO recognizes that most people will focus on completing challenges stealthily and upgrading their mastery level, which, in turn, lets you try more creative assassinations until you’ve exhausted every avenue and moved on to the next level.

That kind of tireless experimentation is the core of Hitman. After hours spent in a single level, you’ll start to understand all the systems at play, the ins and outs of character behavior, and the complex cau, e-and-effect mechanisms that make it all work. And IO’s sequel does a fantastic job of serving that formula up to players in familiar fashion, with enough fresh takes and new, ever more creative environments and assassination methods to keep you replaying the same levels over and over.

Like the 2016 Hitman, the sequel features crowdsourced contracts for you to complete if you’re a particular glutton for rigorous challenge under intense constraints. IO is also bringing back the incredible “elusive contract” system, a one-time-only mission structure that kicks off at launch this weekend with actor Sean Bean. There’s also a new multiplayer feature, called “ghost mode” that will let you compete with another player to be the first to kill a target. IO says it will be a work in progress when it goes live this week, with Miami supported at launch and other levels and more features coming down the line.

For players who want to get through all of the content as fast as possible, those online features should tide them over until IO delivers its first of two expansions at some point next year. For everyone else, this is game best enjoyed in slow and steady fashion. It may not be episodic, but Hitman 2 is a game so full of challenges to unlock and secrets to find that I know I’ll still be searching for new ways to kill months from now.

Hitman 2 is available today on the PS4, Xbox One, and PC.