There was a huge gap in the Switch's library of multiplayer titles until recently.

From Super Smash Bros. and Mario Kart to the heyday of Rayman’s rabid pals on Wii, Nintendo and its third-party publishers drown consumers in party games on every generation of Nintendo hardware. You know the ones. You get together with your friends, run a few races or play a few dozen mini-games. Then the party disbands until the next time you go back to the game, where little to anything has changed. Same tracks, same characters, same mini-games, same rules.

My wife and I each own a Switch. When we want to play a multiplayer game, we turn to Mario Kart 8 Deluxe. It’s fun, but we’ve been spoiled by a diet of progression-heavy games on other platforms: Resident Evil 5, EDF 2017, Dark Souls—the types of games where you invest dozens or hundreds of hours and are rewarded with upgrades and continuity from session to session. We both enjoy Zelda: Breath of the Wild, but that’s a meal for one. With few exceptions, the Switch sorely lacked the type of multiplayer game good for more than a laugh with friends.

Then along came Blizzard Entertainment determined to feed us Diablo 3: Eternal Collection, a veritable feast compared to the bevy of snack-sized games that clog Nintendo’s eShop. From the original 2012 campaign and the 2014 Reaper of Souls and Rise of the Necromancer expansions to a cornucopia of end-game content, the Switch version has every last morsel of content Blizzard has baked into the game since its initial release on PC in May 2012.

Best of all, it’s playable on the go, making the Switch adaptation arguably the most robust incarnation. 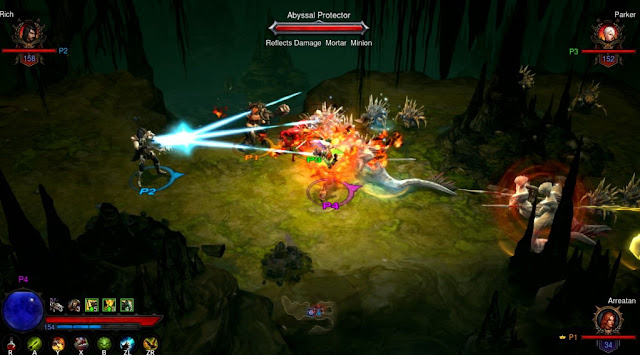 No Bones About It
Diablo 3 turned heads when it came to current- and last-gen Xbox and PlayStation platforms. Not just because of all the content it provided, but because of how well and natural a game designed to be played with a mouse and keyboard has translated to gamepads. The Switch version is no exception.

If you’ve played any of those versions, you’ll feel right at home playing Diablo 3: Eternal Collection on Switch. You move with the left analog stick, dodge and roll with the right stick, map skills and their accompanying runes (modifiers that change some of the effects and mechanics of your character’s abilities) to six of the controller’s buttons, and use the rest for miscellaneous actions such as swigging health potions and hopping a portal back to the nearest town. The game supports Joy-Con and more traditional, Pro Controller-type peripherals, so go to hell on your own terms.

Hell is quite full these days, and that’s a good thing. Diablo 3: Eternal Collection packs in every piece of content currently available for Blizzard’s game, including the 2017 Rise of the Necromancer expansion. The key difference is that Adventure Mode, where you enter procedurally generated areas to track down bounties (kill bosses, explore areas, and so on) in exchange for greater rewards is unlocked from the start rather than as a reward for finishing the story. You can go from creating a level-1 character to Adventure Mode right out of the gate.

That should appeal to veteran players who have finished Diablo 3’s campaign dozens of times, as well as new players who should be immediately introduced to the best content the game has to offer.

Aesthetically, little separates the Switch port from its counterparts. The graphics are slightly sharper on beefier platforms, though that’s something you’ll notice more in the “paper doll” inventory screens where you get a close-up view of your character than during play, when you’re more focused on mowing down monsters and gobbling up loot.

The load times are slightly longer on Switch, especially when creating or joining a session. Even then, your fun won’t be put on hold for long. Creating or joining a session takes around 12 to 15 seconds. Once you’re up and running, jumps from town portals to hostile areas and vice versa are near instantaneous, and the odd loading screen won’t keep you waiting for more than a few seconds.

Up to four players can play on the same system, or via online or local networks, and all multiplayer modes feature drop-in-drop-out functionality. While playing solo and over online and network connections with my wife, I noticed only one instance of slowdown, and it was so minor I’m not sure it even happened. The action held fast and frantic when I played in docked or portable mode, even on higher difficulty settings with hordes of monsters pouring in from all sides and both of us detonating corpses while our armies—dozens of skeletons, revived demons, and a golem each—clobbered our foes. Every battle was like a barroom brawl, only with bodies exploding and monsters rising up from the ground to do our bidding.

Reaper of All My Spare Time
There are two schools of thought on the deluge of ports that have come to Nintendo Switch over the past 20 months. Some players won’t touch old content and are eager for new games, while others who view any ports in a new light thanks to the Switch’s portability. I fall into the latter camp.

The Switch’s greatest advantage is that it can be played anywhere. As a Diablo fanatic for more than 20 years, I’ve always wanted a version of any installment of the trilogy to play when I get the itch to pop monsters like pinatas. That makes Diablo 3: Eternal Collection on Switch a dream come true, even at the $59.99 price point, which some may consider steep when most ports run $40 or cheaper. 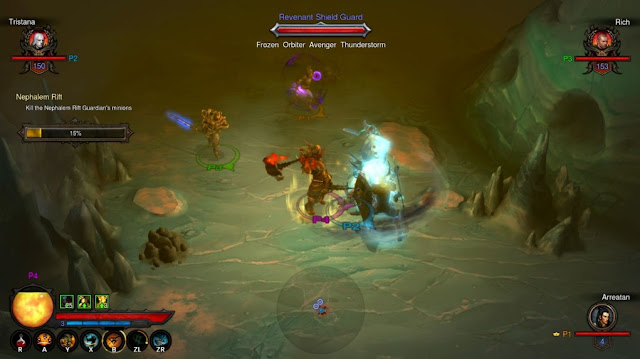 If that’s your mindset, consider this. Diablo 3: Eternal Collection and Dark Souls Remastered, which launched on Switch in mid-October after a delay, quenched my wife’s and my thirst for multiplayer games we could come back to again and again thanks to substantial progression to show for our time. Sure, both are re-releases, but they’re endlessly enjoyable and, I hope, will encourage developers to create more progression-centric multiplayer titles to Switch.

Blizzard should be commended for the gestalt that is Diablo 3: Eternal Collection. If you’ve followed Diablo 3’s history, you know the game walked a long, often bumpy path. It’s been addictive for several years, but the option to play on the go makes this package a must-have any Switch owner, especially players looking for a game to lose themselves in for dozens or hundreds of hours.

This review is based on a Switch digital code provided by the developer. Diablo 3: Eternal Collection will be available at retail and on the Nintendo eShop on November 2, 2018, for $59.99.