The Game’s Afoot, or Holmes for the Holidays, a recently ended production of The Theatre Group at Santa Barbara City College, is Ken Ludwig’s 2011 play that won the Mystery Writers of America Edgar Allen Poe Award for best play.

As performed by the SBCC Theatre Group actors, some whom we’ve enjoyed on the local stage for decades and some newcomers we’ll be lucky to see more of, it was a spirited frolic in light murder mystery style and a fetching self-referencing comedy that engaged its sold-out Garvin Theater audience from beginning to end. 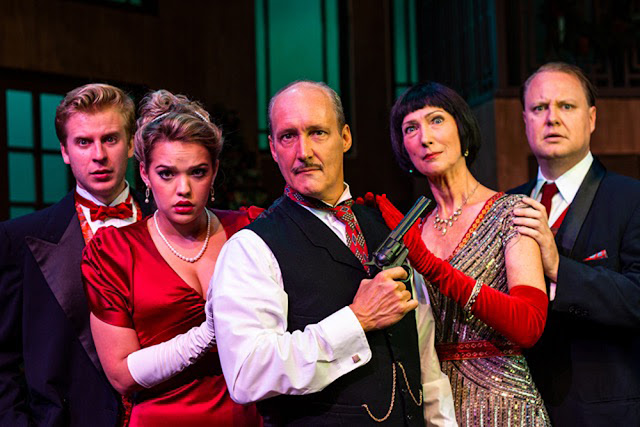 If you’re a fan (with a sense of humor) of canonical theater, theater culture or comic murder mysteries, this show will delight you.

From the opening play-within-the-play, the bulk of the script is made up of clever references to theater and Western literature, from William Shakespeare, Geoffrey Chaucer and John Keats to Arthur, Conan Doyle and Eugene O’Neill, to jokes about theater critics (ahem), theater companies and actors, and the plot is pure genre.

Protagonist William Gillette (Brian Harwell) is based on a real turn of the century actor-playwright who was obsessed with Sherlock Holmes, portrayed him repeatedly and made his fortune from an original play about Doyle’s detective.

When his theater colleagues join him and his mother at the mansion for Christmas Eve, several mysteries to be solved have already taken place and another is on the way.

Naturally, each character has some motive for committing the crimes, and suspicion shifts from the deceptively flighty mother (Lesley Ann Story) to the less-successful best friend (Sean Jackson) and his wife (Jenna Scanlon), the ingénue on her second marriage in as many years (Madison Duree), her up-and-coming actor and new husband (Benjamin Offringa), and the vicious theater critic (Nancy Nufer).

Comic timing and interplay among characters is speedy and sharp. Each cast member earns laughs and holds true to character to get them.

Nufer, a longtime favorite in local theater, turns in a hilarious performance as a venomous theater critic and psychic medium, from her grand entrance to the ways she burns every other character in the play to superb physical comedy.

Leslie Gangl Howe arrives in the second half as a detective and aspiring actor. She’s as adept at cracking us up with silent moments of reflecting on oddities among the suspects or of oblivious pondering as she is with her spoken lines.

Set design is always a treat at the Garvin, and this production is especially fun.

Set in 1936 just after Prohibition, of course there’s a secret bar behind the bookcase, but the shifting set also transforms the first-scene playhouse into a lavish Connecticut riverfront country home complete with a library, dining room, living room, a weapon-covered hearth, multiple stairway landings, halls and a coat closet, all of which figure into the plot.

Period sets and costumes capture the luxurious design and fashion of the era as well.

And Gillette’s tricked-out house features gadgets, gizmos and technology that were only science fiction in 1936 but are all de rigeur for us today, which makes how outrageous they seemed at the time another source of chuckles.

Something to love about the SBCC Theatre Group is how personal each production feels. Director Katie Laris’ program notes share the company’s love of mysteries and lovingly credits longtime theater manager Pam Lasker with choosing this one to be played.