'Stardew Valley' On iOS Feels Like A Mindfulness Exercise - Review

'Stardew Valley' On iOS Feels Like A Mindfulness Exercise - Review

I’ve never been a fan of farming sims but was curious to try Stardew Valley, especially after learning that the game was a one-man passion project, Minecraft-style.

This game started on PC before spreading to consoles, but feels designed for touchscreen controls; tapping to plant those crops feels fairly visceral. I chose to play on iPad, having found the iPhone screen slightly too small to pick up on the minutiae of pretty pixel art.

I opted to start on a Wilderness Farm, simply because of the promise of supernatural nighttime invaders; I used to be a Terraria junky and figured Stardew wouldn’t stray too far from that experience. 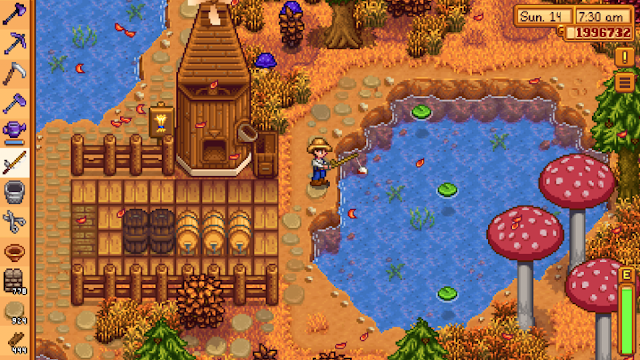 That’s not a great decision for a first-time player but does add a certain level of adrenaline to those nights where you sprint against your energy meter, praying that the golems don’t stop you from reaching the safety of bed before you collapse in exhaustion.

Night terrors aside, starting the game is a slow experience, and I must admit, I didn’t quite “get it.” The days passed fast as my avatar sprinted around Pelican Town, hurriedly introducing himself to every single passerby, like Ferris Bueller on amphetamines.

Incessantly planting, watering, and repeating felt like a ridiculous chore, like adding yet another mundane task to your real-life list of annoying-but-necessary household activities. But after a season passed, and I started to reap the benefits of sowing seeds, all that touchscreen tapping became strangely serene.

Mindfulness is all about experiencing the present, without fixating on the past or worrying about potential future threats, and Stardew Valley feels like a mindfulness training exercise. This is particularly reassuring as an iOS gamer, because the majority of App Store games feel like an array of flashy slot machines, demanding your attention and credit card details; it’s nice to play something that feels so still.

Farming became a routine. Wake up, water the plants, pick a few strawberries from the fields and head into town to chat with the locals. Wander through the shops, or pick a quiet fishing spot by the river and try to land a catfish.

While playing, you become strangely present, focused on the small task at hand, understanding the benefit that lies ahead. It’s like weaving a tapestry, knowing it will all come together and form a beautiful pattern, eventually.

There’s little urgency to this game unless it is self-inflicted. Venturing down into the mines and fighting monsters is life-threatening, technically, but the combat system isn’t particularly taxing; you only really die if you allow yourself to.

It’s all about making tiny steps toward big goals, but the gameplay also feels comfortably aimless. Collecting enough metal to forge a new tool isn’t an urgent task; you might just get distracted by a bountiful walk through the forest, or an NPC dawdling near your path. But that’s alright - there’s always tomorrow, and the day after that.

Playing Stardew Valley is like how I imagine retirement feels. Pottering around the garden, exchanging the smallest of small-talk, and getting excited over a new fishing rod. There’s something amusingly ironic in the popularity of farming sims, seeing as the majority of us live in fast-paced city streets by choice. Sometimes, it’s nice to pretend to be a guy with nothing to do, but who always has something to attend to.

My only real criticism would be the lack of sophistication when it comes to NPC interaction. Early on, I decided that Linus, the lovable vagabond, was going to be my best friend, and I showered the guy with gifts and attention.

But Linus is obsessed with the fact that he is a homeless outsider, stigmatized by the community. Get over yourself dude, and stop rejecting my gifts - took me weeks to grow that cauliflower, and you threw it back in my face.

But in all seriousness, the dialogue could use a lot more depth; an RPG-level of interaction would make these characters feel far more fleshed out. Right now, simply showering them with their favorite presents is a shortcut to friendship, even marriage.

It’s kind of frightening how much time you can sink into this game, and switch it off feeling like there’s still so much left to do. I manage my pixelated farm with a meticulous patience and organization that, if I applied to my own life, would transform me into a peaceful, super-productive embodiment of success.

Now, if you’ll excuse me, I have some potatoes that I urgently need to attend to - winter is just around the corner.

I'm fascinated by mythology, art, popular culture, and storytelling, in all its myriad forms. Currently, I spend my days blogging, screenwriting, and delving into the independent film scene in Toronto, Canada.