Worth paying the iron price Reigns: Game of Thrones review

Worth paying the iron price Reigns: Game of Thrones review

Reigns: Game of Thrones sounds like a project born from someone spying the “most ambitious crossover” meme that did the rounds earlier this year and treating it as a challenge.

Mashing up the Tinder-meets-monarchy genius of the Reigns series with medieval fantasy mega-franchise Game of Thrones is such a conceptual stroke of genius you have to wonder why it didn’t happen sooner.

Now that the dream is finally a reality, is Reigns: Game of Thrones-worthy of the Iron Throne, or should it be thrown out The Eyrie’s Moon Door? Let’s find out!

Reigns, Westeros style
For the uninitiated, Reigns is an award-winning series of games developed by U.K. studio Nerial. Both the original Reigns and its sequel, Reigns: Her Majesty, crown the player as the king or queen of a kingdom full of soldiers, priests, peasants, charlatans, each with their own agendas and desires.

Interactions with your increasingly large pool of not-so-loyal subjects play out as a series of endless binary choices where you swipe left or right on the character’s card to make a decision.

Each choice positively or negatively impacts your standing with one or more of four factions — army, church, people, treasury. Increase your standing with any of these groups to the max or have it hit rock bottom and you’ll be swiftly deposed in a fatal and often hilarious fashion.

In-game years pass by in minutes and, depending on how diligent you are with your choices, a single reign can last several decades or be violently cut short in the prime of your noble avatar’s youth.

Reigns is a perfect game for short bursts of play on the go (online or offline), but it’s also engrossing enough to lose yourself to for hours on end. You can try to outlast your record reign or unlock achievements that carry over to each new ruler and, in the case of Reigns: Her Majesty, progress an overall story that plays out on a much grander, cosmic scale. 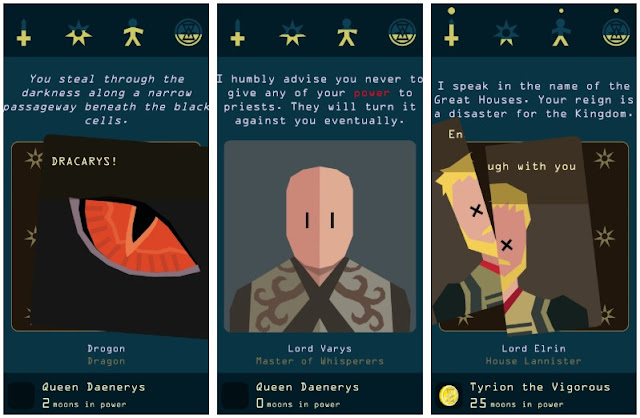 Thankfully, while there could have been a temptation to tweak the formula to accommodate the Game of Thrones universe, Reigns: Game of Thrones retains the core gameplay and structure of its predecessors. This should come as a huge relief, as Reigns is one of the most unique games available on the Play Store, built to do as much as possible with just a handful of simple gestures.

In fact, one of the most impressive things about Reigns: Game of Thrones is how the Westerosi-flavored influence simultaneously feels like a basic reskin of the Reigns experience that supplants original characters with memorable faces from the books and TV show, but also a natural, sometimes bold extension of the series’ main mechanics.

The four factions are fundamentally the same, now based on established parts of the Game of Thrones canon. The church is now represented by priests of the Faith of the Seven, while the Master of Coin and representatives from the Iron Bank of Braavos stand-in for the treasury.
While many changes are obvious and simple — you’ll be sitting on the Iron Throne instead of a regular throne and listening to the Game of Thrones theme a lot  — Reigns: Game of Thrones goes a step further. It’s an authentic adaptation that perfectly recreates many of the HBO series’ most popular characters without losing Reigns’ wry, darkly comic edge.

You’ll meet characters like Lord Varys, Samwell Tarly, and Tyrion Lannister as you rule, and each are immediately recognizable not only through their charmingly designed sprites, but also the dialogue.

The game manages to convey all of the traits and machinations of each character in just a few short sentences. New players unfamiliar with Game of Thrones lore won’t be too lost, and fans will be able to savor every nod and wink to the wider story. Just don’t go in expecting any of the salacious sex and gratuitous violence of an average episode of the HBO series. This is still a Reigns game after all.

A Swipe of Ice and Fire
Reigns: Game of Thrones’ biggest twist, on both series, centers on how it handles the main protagonist of each playthrough.

Set in a hypothetical “what if” scenario where the tyrannical Cersei Lannister has been toppled and cast out of King’s Landing, you first take on the role of everyone’s favorite Queen of Dragons and new ruler of the Seven Kingdoms, Daenerys Targaryen.

You’ll soon realize that you actually know nothing (Jon Snow). 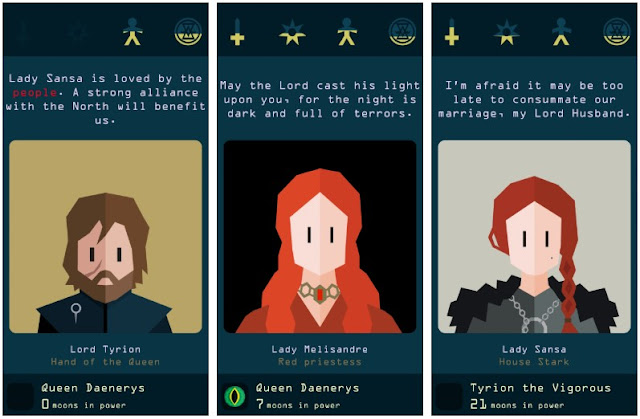 Once Dany inevitably bites the dust you’ll be greeted by the mystical red priestess Melisandre who ponders your fate, questioning whether Daenerys was truly the reborn legendary hero the world has been searching for.

This meta-narrative allows Reigns: Game of Thrones to present nine playable characters, including Jon Snow and other fan favorites, each of whom could be the next “Azor Ahai.” This represents a huge step forward for Reigns, which previously only toyed with the idea of multiple characters by giving new rulers throwaway names and titles.


Reigns: Game of Thrones is an authentic adaptation that perfectly recreates many of the HBO series’ most popular characters without losing Reigns’ wry, darkly comic edge.

While this can make the whole thing feel a bit daunting — each leader has their own allies, enemies, and objectives — the game cleverly spaces out the introduction of new player characters as the broader story steadily unfolds.

Game of Thrones fans can also have a little fun with each new character by either roleplaying the decisions you think they’d make based on their popular persona, or essentially play out your own fan fiction. Want to turn the heroic Jon Snow into a bloodthirsty, war-hungry autocrat? Reigns: Game of Thrones lets you do just that.

No matter who you choose, however, winter is always coming, and the threat of the White Walkers is never too far away. Figuring out how to survive the cold with each character takes patience, strategy, and a bit of luck. 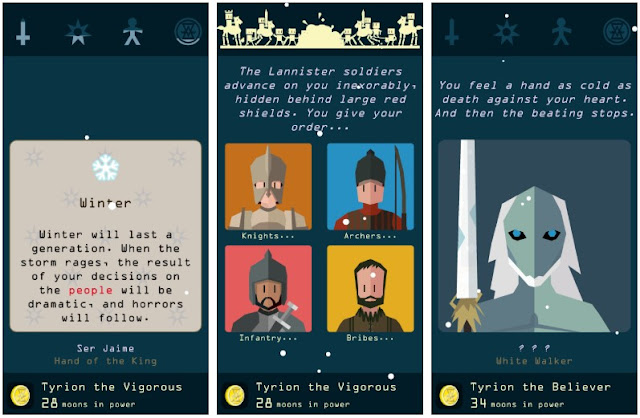 Reigns: Game of Thrones also introduces branching decisions. These are usually fairly inconsequential, like during small council meetings where you choose one of four people to speak to. Occasionally you’ll see a knock on effect if you choose to go to war or begin or end an allegiance.

During one playthrough as Jon, I opted to off Varys (yes, you can sometimes kill people with a single swipe now) and replaced him with a representative from House Greyjoy to quash a military standoff between King’s Landing and the Iron Islands.

Unfortunately my new Master of Whisperers wasn’t all that loyal and I eventually had to up sticks and move back to Winterfell through another new gameplay addition, travel between locations. Many of these moves are represented by simple background transitions, but others will see you traveling along a segmented path with decisions to make along the way.

The night is dark and full of errors
For all the ingenuity behind Reigns and its adaptation of the Game of Thrones license, a few niggles still carry over from previous entries in the series.

The most infuriating is the seemingly random results of some of your choices. Every now and again you’ll swipe left or right thinking you’ll be appeasing the church or saving money only to infuriate a priest or end up destitute. Sudden deaths and fleeting reigns are all part of the overall design, but some of the more vague, cryptic writing can occasionally lead to an early demise that feels unfair.

The usable items of Reigns: Her Majesty have also been jettisoned, which feels like a step back considering how drastically each item could change your fate. Likewise, the story doesn’t get anywhere as weird and wonderful as Her Majesty’s bonkers, fourth wall-breaking plot — out of servitude to the Game of Thrones license no doubt. 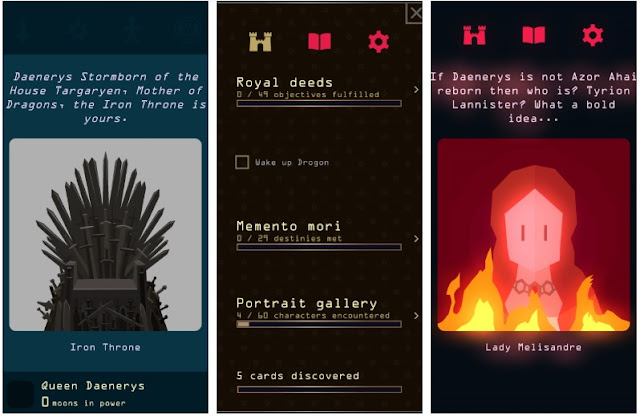 For Reigns addicts, there’s enough new here to keep things fresh, but it also stays true to the DNA of the previous games. Personally, I still prefer Reigns: Her Majesty’s offbeat weirdness, although you could (and should) pick up both games for less than $7 on the Play Store.

Love both? Stop reading this review immediately, hit the button below, and queue that download. When you play Reigns: Game of Thrones, you win or you die, and you’ll love every minute of it.